A HALLOWEEN MESSAGE FROM THE CAST OF "BEING HUMAN"

Labels: League of Themselves, Online TV, Outside the Box, TV timeline

AS SEEN ON TV: THE 1959 VINCENT PRICE HALLOWEEN SPECIAL 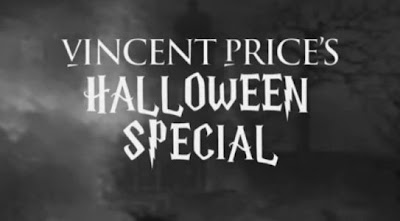 Vincent Price:
"All Hallow's Eve. When the minions of Samhain come back..." 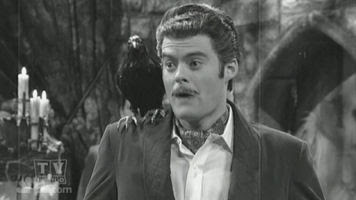 AS PLAYED BY:
Bill Hader

Vincent Price:
"Thank you, and welcome to my Halloween special! Tonight, prepare yourself for a night of spooks and scares, as we have invited over some of our most famous friends for some tricks...and also some treats!" 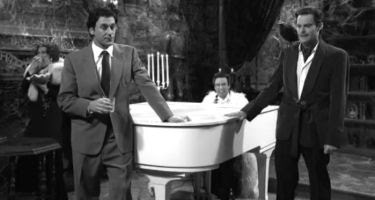 Labels: As Seen On TV, Sign of the Crossover, Sked Alert, Toobworld Central, Twipped from the Headlines

AS SEEN ON TV: JOHN JAMESON 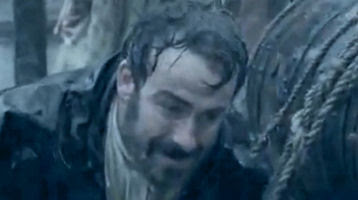 AS PLAYED BY:
Lenny Hayden

From Wikipedia:
Jameson is a single-distillery Irish whiskey. The company was established in 1780 when [Scottish businessman] John Jameson established the Bow Street Distillery in Dublin. Originally one of the six main Dublin Whiskeys, Jameson is now distilled in Cork, although vatting still takes place in Dublin. With annual sales of over 31 million bottles, Jameson is by far the best selling Irish whiskey in the world, as it has been internationally since the early 1800s when John Jameson along with his son (also named John) was producing over a million gallons annually.


For a look behind the scenes in creating this Toobworld only version of Jameson's life, click here. 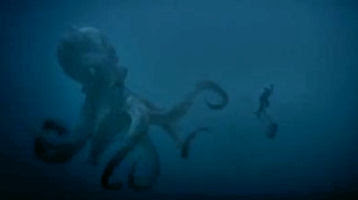 AS SEEN ON TV: REAGAN & CHERNENKO

And now for something completely different..... 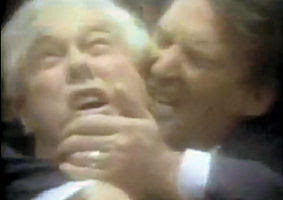 AS SEEN IN:
"Two Tribes"

For the final entry into the TV Crossover Hall of Fame for October - the month of Halloween, Samhain, monsters of all varieties and some sadly too human, we must showcase a location - as has been the tradition this year of the Hall's tenth anniversary.

Last year at this time, the TV Crossover Hall of Fame saluted to classic residents of Toobworld whose portrayers had earlier passed away. And yet although the actors may have been dead in the real world, the characters still existed in Toobworld. And they'll never die because they're already members of the undead.

I'm speaking of Lily Munster and her father Grampa, as played by Yvonne DeCarlo and Al Lewis.

So I figured - why not pay tribute to the home in which they lived, at 1313 Mockinbird Lane in Mockingbird Heights? 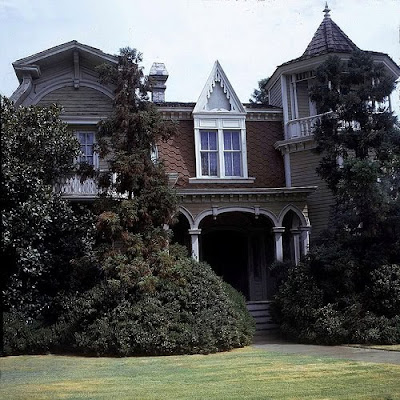 "THE MISSILES OF OCTOBER": DEGAULLE

For the final entry in our thirteen day remembrance of the Cuban Missile Crisis, we have French President Charles DeGaulle.... 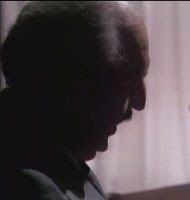 AS PLAYED BY:
Ron Feinberg

DeGaulle was kept mostly in shadow and only his right profile was seen. This was most likely due to Feinberg not resembling the Frenchman that closely. 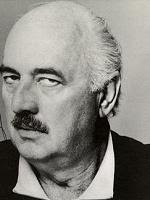 Here DeGaulle is seen with Dean Acheson, who was sent as an emissary to the leaders of America's European allies to rally their support against the Russian deployment of missiles. 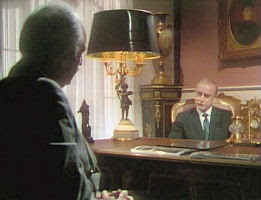 I best remember Feinberg from his stint near the beginning of 'Mary Hartman, Mary Hartman' as Detective Mike Johnson, who was assigned to protect Heather Hartman from the mass murderer..... 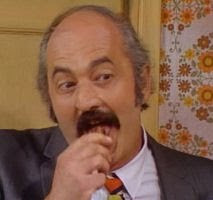 It's Two For Tuesday!

In "The Missiles Of October", character actor Bern Hoffman appeared as a member of the Soviet Presidium, and he only had one line. His character is given no name in the credits, never addressed by name in the production. But just look at him! Surely, there can be only one logical choice for which historical figure he could be. 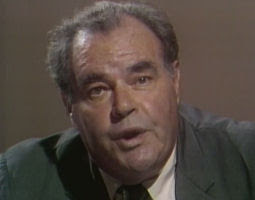 Brezhnev has appeared in two other productions, however; both foreign-made:
LEONID BREZHNEV
AS SEEN IN:
"Brezhnev" 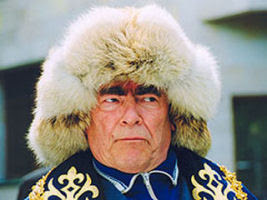 AS PLAYED BY:
Sergey Shakurov

AS SEEN IN:
"Galina" 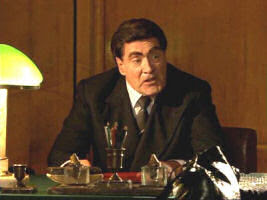 AS PLAYED BY:
Sergei Bezdushny

"THE MISSILES OF OCTOBER": FOMIN

Out of all the events (I hate to call them sub-plots, considering....) that happened during the time of the Cuban Missile Crisis, the meetings between ABC correspondent John Scali and the KGB head in Washington, Aleksander Fomin, stand the test of time as being my favorites. There was just that aura of true undercover work about those meetings, as though they were the inspiration for the countless spy encounters to come from spy thrillers written by John Le Carre and the like.

From Wikipedia:
Aleksandr Semyonovich Feklisov (March 9, 1914 – October 26, 2007) was the NKGB Case Officer who received information from Julius Rosenberg and Klaus Fuchs, among others.
Feklisov was transferred back to the United States and became the Washington, D.C. Rezident, or KGB Station Chief, from 1960 to 1964. His cover name at that time was Aleksandr Fomin. As KGB Rezident, Feklisov (Fomin) proposed what became the basis for resolving the Cuban Missile Crisis: removing missiles from Cuba in exchange for a promise that the United States would not invade the island nation.
Alexandre Feklisov died on October 26, 2007 in Russia at the age of 93. 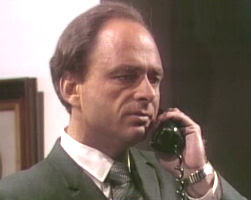 AS SEEN IN:
"The Missiles Of October'

AS PLAYED BY:
Harris Yulin

The head of KGB intelligence operations in the US, Aleksander Fomin, proposed a deal to the state department in which the missiles would be dismantled by UN inspectors, Fidel would pledge not to receive offensive weapons in the future, and the US would pledge not to invade Cuba. The state department replied that it was interested.
Here are Scali's notes from that first meeting: 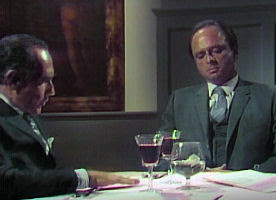 In long give and take, mainly on Cuba, Fomin made these main points:
1. Soviets are willing to allow the same kind of verification for exit of bombers as they allow for home shipment of missiles. [The following handwritten sentence appears in parentheses at this point. "Check by US planes of Soviet ships taking bombers home."]
2. Further on-the-spot inspection depends on U.S. negotiations with Cubans, not with negotiations with Soviets, because Cuban "sovereignty" is involved now.
3. Soviets are willing to send technicians connected with IL-28s home. He claimed all technicians connected with missiles already have gone home. He professed to be ignorant of continuing stay of any missile technicians, particularly those whose past role has been to guard missile installations.
4. Kennedy, he said, will lift the blockade today (Tuesday) and is now drafting text of non-aggression pledge he promised to make. "This will solve the Cuban problem."
5. Khrushchev has carried out all his undertakings with the President and is anxious for further progress in detente. He repeatedly asked what was next in President's priority, specifically returning to nuclear test agreement and non-aggression pact between Warsaw and Atlantic pact powers.
6. He implied repeatedly "progress could be made" in nuclear test agreement with compromise between number of on-site inspections suggested by West, which he put at 12, and number proposed by Soviets which he said was 3.
7. Nothing now seems to stand in way, he said, of Warsaw pact-Atlantic pact non-aggression treaty. Russia's ready, if only Kennedy is.
9. [sic] He brought up what he said was Russia's 1956 proposal for creating 800 mile aerial surveillance zone on both sides as step toward disarmament. Would U.S. be interested in this now, he asked, even though idea was rejected by "Dulles administration." I replied that if I remembered correctly zone proposed at that time was pretty lopsided in favor of Soviet Union. He replied this whole area could be discussed again, perhaps with better results.
10. Russia wants to concentrate on building up its economy and thus is in great need for prolonged period of peace. But there must be reasonable concessions on both sides, not on just Soviet side.
11. Soviets are being "neutral" in Chinese-Indian war. Russia is unhappy about this but at the present time can't do anything to stop it because the Chinese are being difficult. They don't approve of Soviet agreement with Kennedy because Chinese have been observers at all Soviet nuclear tests and they know power Soviets have. Therefore Chinese are asking, "why do you give in?"
12. Soviets realize Kennedy administration is much more reasonable, flexible and imaginative than Eisenhower administration was. Thus, Soviets realize there is now opportunity for reasonable agreements. But President mustn't push what he believes to be his present advantage too far, lest it encourage "hard-line" group in Moscow.
(I made points: Russia has to agree to effective on site inspection in Cuba; must also agree to pull all technicians out connected with missiles and bombers, and give satisfactory pledge not to reintroduce weapons or technicians. Kennedy considered follow-through on Cuba matter of first priority. Only after this settled would there be any reasonable prospects for successful negotiations on testing, disarmament, and Warsaw-Atlantic pact agreements. I also said it wasn't true that Kennedy had agreed to Adenauer's alleged suggestion that all negotiations with Soviets over Berlin be broken off. On contrary, I said, President believed close brush with war over Cuba made it incumbent on both Soviets and Americans to seize opportunity for at least limited start toward responsible east-west agreements.)
Source: Kennedy Library, National Security Files, Countries Series, Cuba, General, 11/16/62-11/20/62. Confidential. Drafted and typed by Scali at 3:40 p.m., November 20. According to a typed note on this memorandum, Fomin requested this meeting on November 16. The two men met at Aldo's Restaurant in Washington.
BCnU!
Posted by Toby O'B at 12:05 AM 0 comments

"THE MISSILES OF OCTOBER": GROMYKO

ANDREI GROMYKO
MINISTER FOR FOREIGN AFFAIRS
FOR THE SOVIET UNION 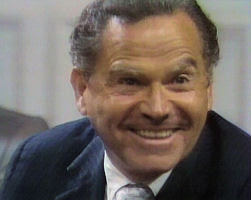 AS PLAYED BY:
Nehemiah Persoff
BCnU!
Posted by Toby O'B at 12:05 AM 0 comments