While I was on the mend from foot surgery at the Muller Clinic, I saw this crossover from a different fictional universe, that of the comic strips.  Some of them have counterparts in at least the Tooniverse, but I don't think any of them have had live-action interpretations for Toobworld.

No matter.  It's still a fun example of a shared universe.

The comics involved are:
I have no idea who the snoring guy with the red tie could be, if he is indeed from another comic strip....

Labels: Book 'em, My So-Called Life, O'Bservations, Outside the Box

According to the Hollywood Reporter, EdSkrein is out of 'Game Of Thrones' as Daario Naharis.  He will be replaced by Michael Hulsman.

When I heard that the sell-sword Daario Naharis of 'Game of Thrones' was being being recast, I wasn't too happy.  I don't like Recastaways.  They take you out of the illusion.

But at least George R.R. Martin provided an out for a splainer such as m'self: the society of Faceless Men who can change their appearance.  It was already established in the televersion of "A Song Of Ice And Fire" thanks to the character of Jaqen H'ghar.  (Which was too bad, because I really liked the actor who first played Jaqen.)

But now I've read that the character of Gregor "The Mountain" Clegane has been recast THREE times!  And the roles of Beric Dondarrion and Tommen Baratheon will also be recast.

Tommen is easy enough to splain away - growing pains.  The Toobworld Dynamic always makes allowances for the aging process.

But as for Beric and The Mountain?

I have to admit, I never even noticed the switch done on these Recastaways.  But I don't think the Faceless Men splainin is going to work for these two men.  I don't see them as the type of men woul would join such a cult.  And what of his brother, "The Hound"?  I'm fairly certain that he will act as though this is the brother whom he has known (and hated) all of his life.  But shouldn't he act as though something happened to his brother's face?

Could it be that magic of the kind used by the witch Samantha Stevens and the genie Jeannie Nelson on their spouses was used on The Mountain for the same reason?  Samantha altered the face of her husband Darrin and Jeannie did the same to Tony.  And they did so with no one noticing.  (Samantha even did a test run earlier on nosy neighbor Gladys Kravitz.)

Magic existed on Mondas, the twin planet of Earth Prime-Time on which Westeros could be found.  So why couldn't some of the magic later found on Earth Prime-Time - like that used to alter physical appearances without anyone noticing - have found its origins on Mondas?


Here's one last quick theory of "relateeveety" for the TV version of our movie feature this month - "Casablanca".... 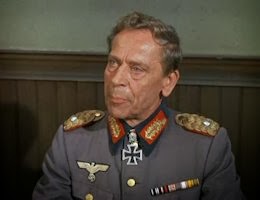 Major Strasser is the one "Casablanca" character who connects the televersion of "Casablanca" to the rest of Toobworld - unofficially, of course.

Heinrich Strasser was one of those characters who had identical cousins.  His look-alike cousin was General Von Katz, who was duped by Colonel Robert Hogan in order to make sure the D-Day invasion of Normandy was a success.

"DIARY OF A PERFECT MURDER" (PILOT)

Perhaps what clicked in his mind was a memory of a similar case from California about fifteen years previously.  It had to be a very famous case to have the details be included in the news coverage back in Atlanta.  And considering the murderer was world-famous symphony conductor Alex Benedict, that would have merited coverage by all of the news outlets of the day.

Benedict killed his concert pianist Jennifer Welles, who was threatening to come forward with revelations about their affair.  This would destroy not only his marriage but his career with the symphony orchestra as well. 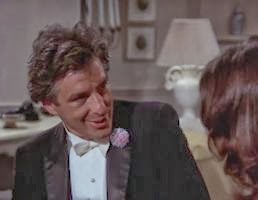 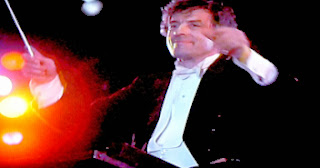 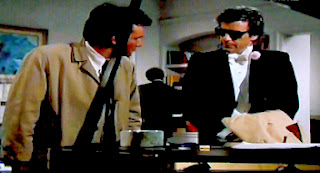 Benedict showed up at her house before that night's televised concert and made her death look like suicide.  But unbeknownst to him, he lost his carnation during the crime and only noticed it was missing during the concert.  Later, he went to Miss Welles' home where he was able to retrieve the carnation before the CSU got hold of it.

In his solution to the case, Lt. Columbo of the LAPD showed videos of Benedict without the carnation during the concert and then of the Maestro leaving the Welles' home now wearing it.  His own wife admitted that he did not put it on after the concert before leaving for the crime scene. 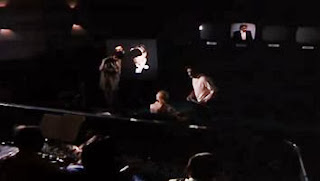 And that's what Ben Matlock was able to do in breaking Paul Lockwood's alibi in court.  With three monitors set up in the courtroom, he first showed Lockwood at a party where he was wearing an ID badge.  The next video showed him leaving the party once he "found out" that his ex-wife was murdered, but there was no ID badge on his lapel.  And finally, as he was leaving the crime scene, Lockwood was now seen in news footage wearing the ID badge again. 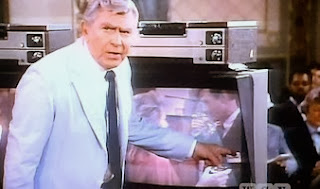 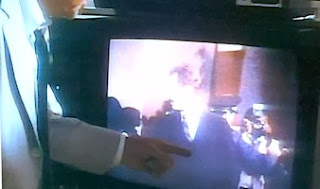 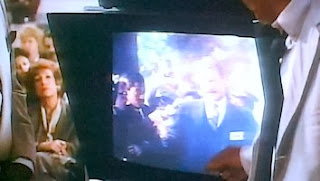 Lockwood was defiant; he said there was no way that the videos could prove he did it.  But Matlock was not concerned: he didn't have to prove Lockwood did it, only that there was reasonable doubt as to whether his own client did it.

Just another one of those little bits o' trivia that theoretically hold the TV Universe together.....

HAIL OUR WINGED OVERLORDS FROM THE "DOMINION"?

A new Borderlands dimension between Toobworld and the Cineverse will be created with the eventual premiere of 'Dominion', a new series on Syfy.
'Dominion' is a spin-off to the 2010 movie "Legion" (the trailer for which creeps out my sister still!)  It will be set 25 years in the Future after the war between angels and Mankind has changed the world.  So even though I won't be around to still be the Curator of the Toobworld Dynamic, I can tell you straight away (from beyond the grave in advance as it were) that this can have no toe-hold in Earth Prime-Time.  If it had, wouldn't it have had some kind of impact on the shows like 'Doctor Who' and 'Star Trek'?
Syfy has given this a series order commitment, so it's a go.
I suppose this new Toobworld will need a name.  "Angel Toobworld" works for me right now.....
You know where I'd like to stick this world?  (Easy....)  In the TV dimension Zombie Toobworld.  Make the claim that the battle between humans and angels claimed zombies as collateral damage.
I just can't see the undead having such lasting power a quarter of a century from now.....
Then again, it could take up residence in a dimension that won't get much use in 25 years, like the '24' Toobworld, the 'Commander-in-Chief' dimension, or the world of 'Merlin'.
BCnU! 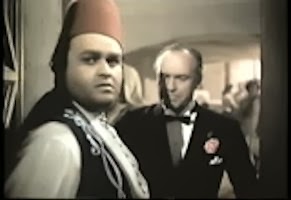 One of the many character actors in supporting roles for the movie "Casablanca" was Dan Seymour.  He played Abdul, the doorman at "Rick's Place" (officially Cafe Americain).  I'm sure there was a doorman at the real nightclub in Morocco, but he probably didn't look like Seymour.  In fact, Dan Seymour resembled another "real life inspiration" for the movie - Signore Ferrari.

Had the producers wanted to go for veracity, they could have cast Seymour as Ferrari.  But the role probably did require an established name.  After all, the supporting cast do a lot of heavy lifting in that film, since Bogart was probably filming three movies at the same time.

Several real-world people have fictional relatives in Toobworld - Tim Russert with Megan Russert of 'Homicide: Life On The Street'; Art Carney with Vera of 'Alice'; and Bryant Gumbel's Uncle Sammy from 'The Nanny'.  The could be true for Dan Seymour.  His televersion could be related to the Signore Ferrari of Earth Prime-Time.  And to get Ferrari's permission to be portrayed in the movie, the producers may have had to hire Ferrari's American kinsman Dan Seymour for the movie.

Ferrari himself may have been egotistical enough to be flattered by the portrayal by a star like Sidney Greenstreet, so it most likely was not a problem that Seymour was cast as the doorman. 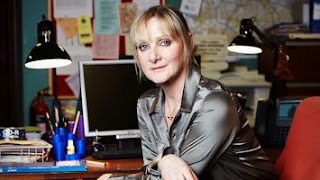 For those who would like to use fictional computer services in their TV fanfic, here's an alternative to Spyder-Finder:

'Scott & Bailey' showed DC Janet Scott using Net-Searcher.  This could be only available in the UK.  I believe this may be the case with Fountain Six, which was created by Luke Rattigan when he was twelve years old.

'Scott & Bailey'
'Doctor Who' - "The Sontaran Strategem" & "The Poisoned Sky"

SPLAININ TO DO: THE VULCAN NECK PINCH 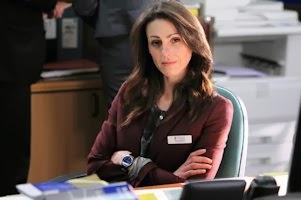 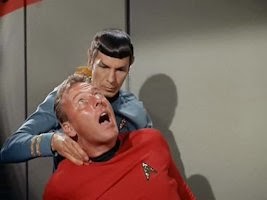 We've gone ointo this before, all of these modern day references to "real-life events" that won't be knowthe people of Earth Prime-Time for several centuries.  Somebody from the Future came back to the early 1960's and gave all the information about Starfleet to a Los Angeles motorcycle cop named Gene Roddenberry.

From that point on, Toobworld history is basically the same as what happened in the Trueniverse when it came to the production of the TV series.  Actors were hired who looked just like the people from the Future.  And all to insure that Earth's future would play out the way that it should.