Sorry I’m late with this.  I was in the hospital all week.  Home now; all’s good.

But enough about me.  Let’s get inductin’!

As our last October/Halloween Friday Hall of Famer, there has been recasting involved.  And Team Toobworld knows how I feel about recastaways.  But I’ve got some splainin to do!

And that’s going to help when it comes to inducting our latest member…. 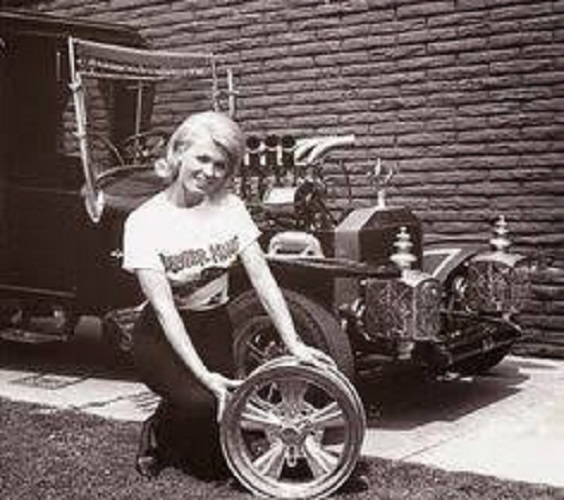 From Wikipedia:
Marilyn Munster is a fictional character in the CBS sitcom ‘The Munsters’, originally played by Beverley Owen and later by Pat Priest. In the original series she is the daughter of Lily Munster's sister, with Herman alluding to her "plain" looks coming from Lily's side of the family. 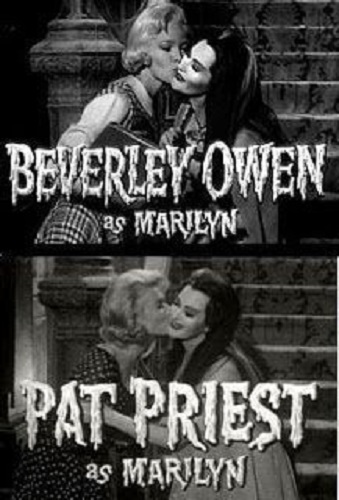 Played first by Beverley Owen and then by Pat Priest, Marilyn lives with the Munsters throughout the series run. It is never made clear why Marilyn lives with the Munsters, rather than with her parents, who are said to still be in Transylvania. Although she is Lily's niece, she is always referred to as "Marilyn Munster" (while the character was being developed, her name was Marilyn Mundane).

Marilyn is a fetching young woman and the only family member who is not ghoulish in appearance; by the Munsters' aesthetic standards, she is distressingly unattractive.

The family views Marilyn's appearance as an affliction, but still treat her with kindness and love. Marilyn herself is all too aware of her "homeliness" and bemoans that she keeps scaring off potential boyfriends, having no clue that the young men are in fact frightened away by her monstrous family.

She attends Westbury College in Mockingbird Heights. She is devoted to her family, and the surest way for a suitor to alienate Marilyn (rather than vice versa) is to disparage them. She considers her Uncle Herman and Grandpa the "two [finest] men [who ever] walked this earth."

Despite being a “normal” beauty by society standards, the Munsters' strange subculture of vampires, werewolves, zombies, sorcerers, mad scientists, et al., have made her a ghoul at-heart (she regularly assists Lily in cooking rodents, & festooning the house with cobwebs).

Like the rest of her family, she believes that the Munster lifestyle is normal, and dissenters are out-of-step. In one episode, Herman was temporarily transformed into a normal, clean-cut man. The family, including Marilyn, was appalled and physically repelled by the tragic event.

Despite standing out amongst the cast more than any other character, Marilyn was the least developed character in the series. She usually served as an ear for Lily's expeditions, or a subject for Grandpa's foiled potions.

Here are the four actresses who played Marilyn: 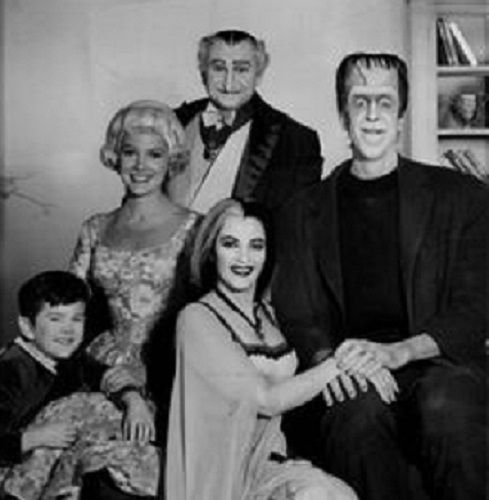 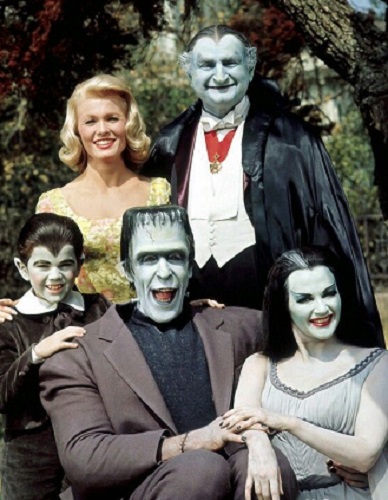 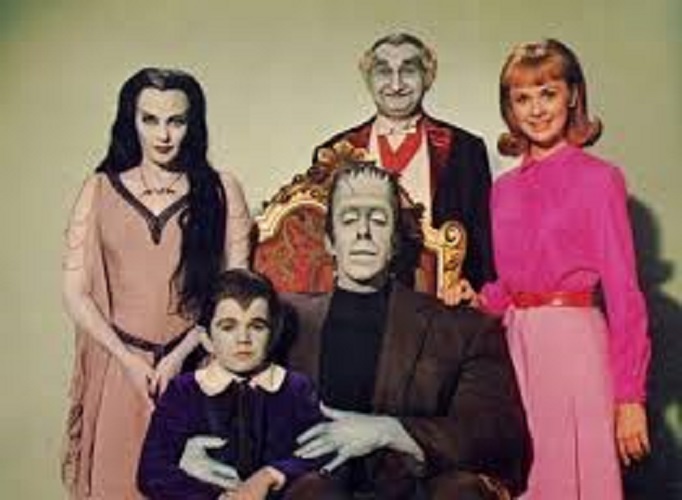 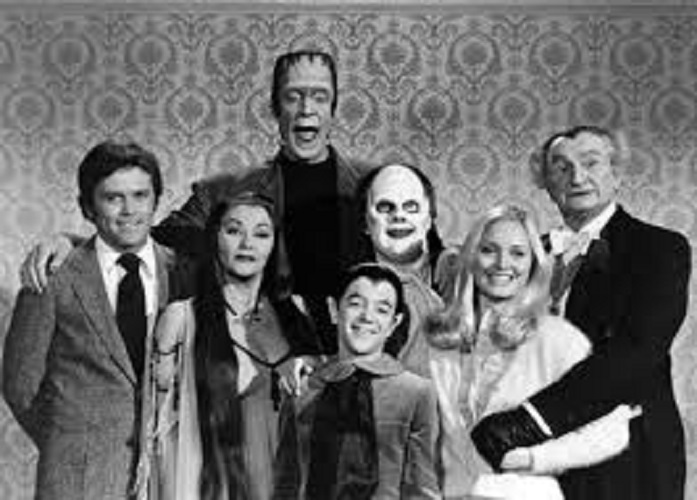 As far as the audience in the Trueniverse was concerned (Sorry, I’m speaking for you all.), it wasn’t just that Marilyn was beautiful (or as the Munsters believed, homely), but that she wasn’t a monster like the rest of them.

The family has at least one vampire, a werewolf, a gill-man, at least two reanimated corpses, and perhaps a succubus (if Lily isn’t a vampiress herself.)

One “monster” not in that family dynamic?

If they had not done a recastaway during that first season in order to give Beverly Owen the chance to go back to her boyfriend in New York, then I might have just relegated the two movies into two different dimensions – the first to the Cineverse, the other to a TV Movie dimension.  Who knows?  Perhaps even to the one which has all those alternate TV Movie Presidents.

But since precedent was set by the TV show itself, my decree is that the two movies should instead be absorbed into Earth Prime-Time as part of ‘The Munsters’ as a whole.

We don’t know what Marilyn was studying in college, but I’m going to claim that she was studying to become a nurse.  The reason for this will become clear in this post later.

Here’s another point to consider – Marilyn is the daughter of Lily’s sister.  At the time of the original series, Lily Dracula Munster was 304 years old.  Sam Dracula, her father, was 378 years old.

So let’s say his other daughter was perhaps 200 years younger than her sister Lily.  Maybe closer in age, and perhaps even older than Lily since she had Marilyn before Lily gave birth to Eddie.

It could be that she gave birth to Marilyn as far back as the 1800s. This would make Marilyn not only a shape-shifter, but an immortal.   She may have been the actual succubus in the family which would have kept her youthful….

Such a situation would not have struck the Munsters as being abby normal, which is why they never brought it up, just as they never mentioned that she looked different from one moment in her life to the next.

However, the fact that she was so beautiful?  Qu’ Elle horror!  Her “homeliness” would always be a topic of conversation.

So it’s pozz’ble, just pozz’ble, that as an immortal, we may have seen Marilyn Munster in the past. 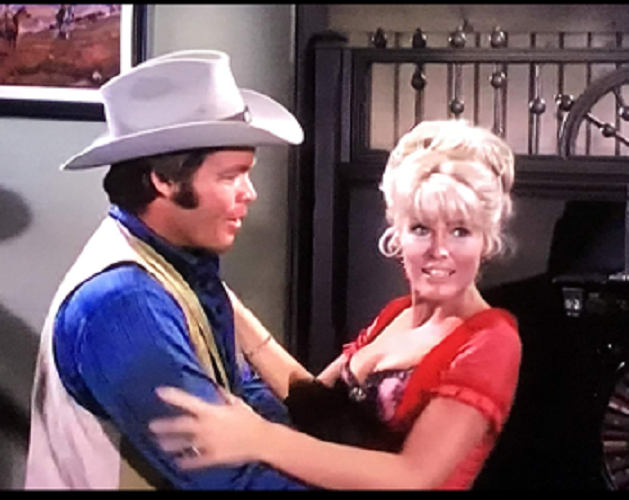 Splainin:
In order to avoid disappointing her family back in Transylvania, Marilyn changed her name to a variation, calling herself “Mary Lou” when she worked as a saloon girl back at the turn of the 20th Century.  (‘The Virginian’ began in 1898.) 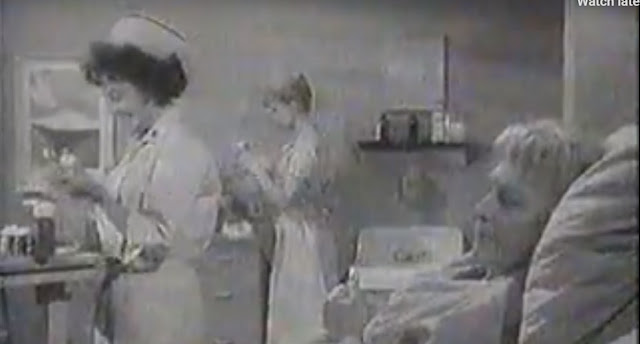 Splainin:
This is why I think she was studying nursing in college – six years later, she would be a fully accredited nurse.  That might be her in the background?  I couldn't find the episode online. 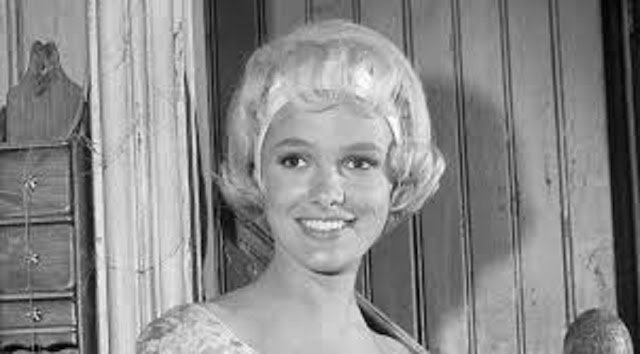 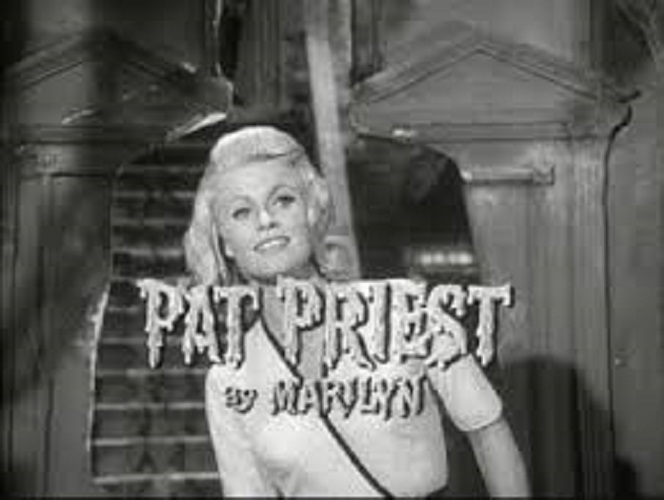 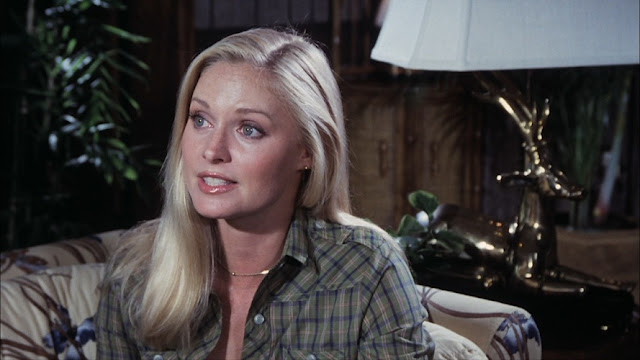 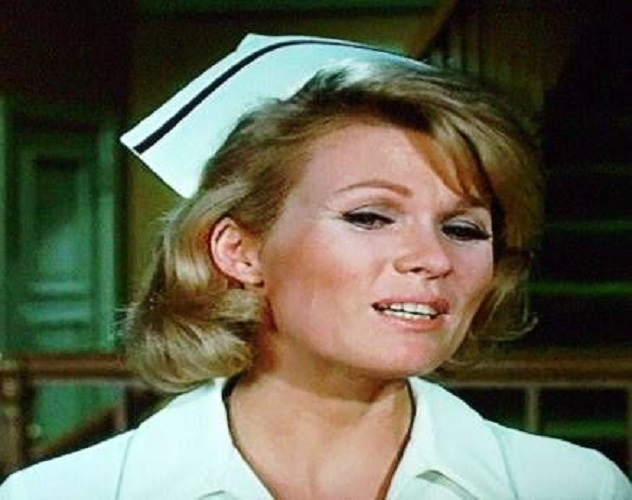 As a nurse, maybe Marilyn helped provide nourishment for Grandpa with the supplies on hand…. 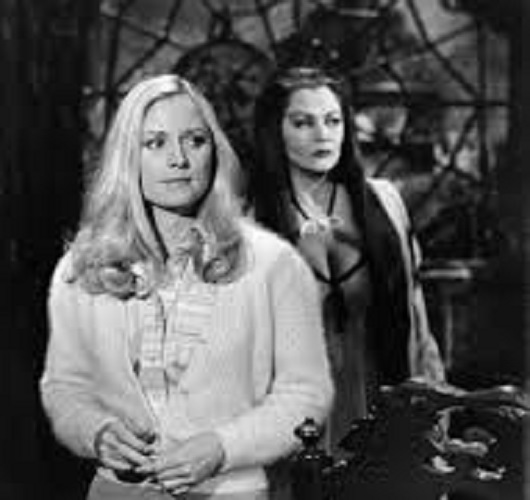 I would have liked to have included other roles played by Beverly Owen, but her characters in single episodes of ‘The Virginian’ and ‘Wagon Train’ had a father or a husband and a sister respectively.  That would play hob with the basic theory of relateeveety regarding the Munsters.  And so would the long-running roles she had in soap operas.

Even if we didn’t add in the other three appearances for Pat Priest, she still has accumulated the most appearances as Marilyn.  As such, she will be the face of Marilyn Munster in the official portrait gallery for the Television Crossover Hall of Fame. 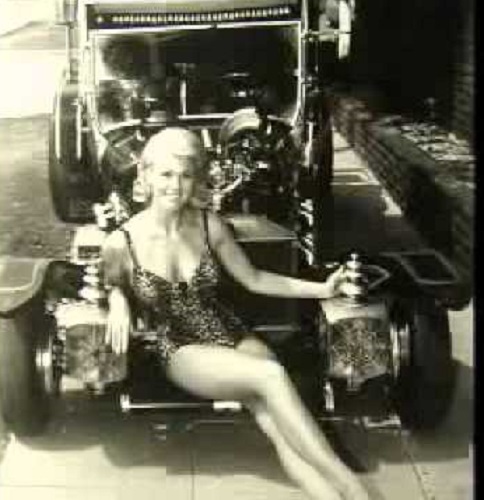 Welcome to the Hall, Ms. Marilyn!  You’ll find your uncle, your aunt, and your grandfather are already members here, waiting for you.

But we're really going to have to do something about your cousin Eddie….

One last O'Bservation:
Wikipedia says Marilyn's last name might have been "Mundane".  I think that would have been fitting.  But I would have spelled it "Mundaigne".....


I always say that TV is a teaching tool, and  the series premiere of ‘The Watchmen’ on HBO proved that. 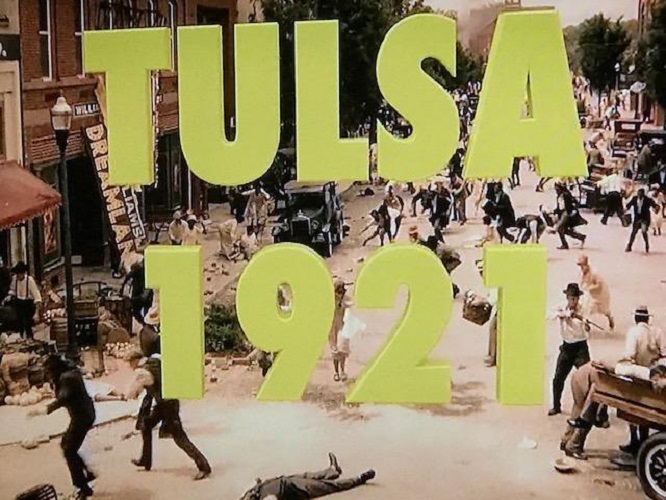 I had never heard about this historical event before!

From Wikipedia:
The Tulsa race riot (also called the Tulsa race massacre, Greenwood Massacre, or the Black Wall Street Massacre) of 1921 took place on May 31 and June 1, 1921, when mobs of white residents attacked black residents and businesses of the Greenwood District in Tulsa, Oklahoma.  It has been called "the single worst incident of racial violence in American history." 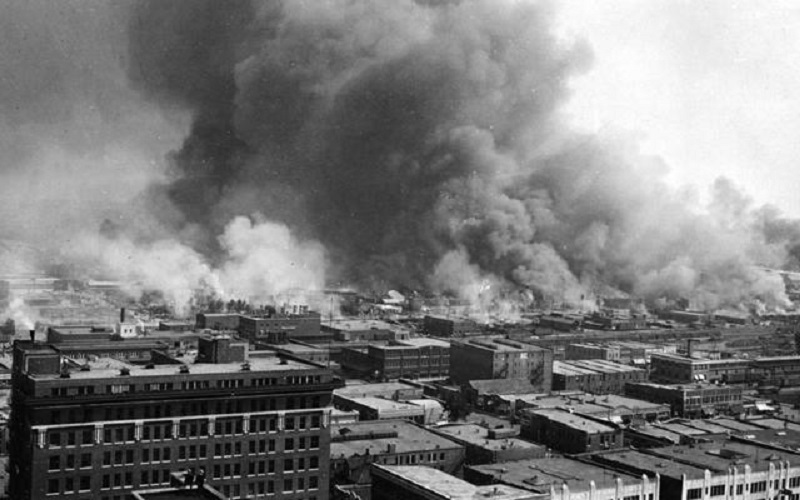 The attack, carried out on the ground and by air, destroyed more than 35 square blocks of the district — at that time the wealthiest black community in the United States, known as "Black Wall Street".

More than 800 people were admitted to hospitals and more than 6,000 black residents were arrested and detained, many for several days.  The Oklahoma Bureau of Vital Statistics officially recorded 36 dead, but the American Red Cross declined to provide an estimate. A 2001 state commission examination of events estimated that between 100 to 300 African Americans were killed in the rioting. 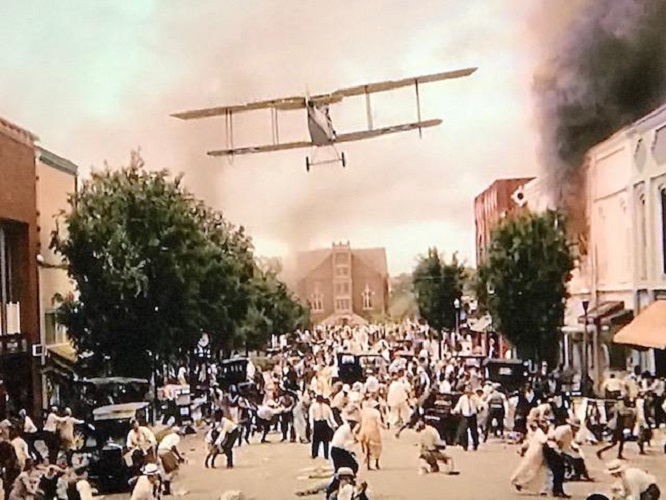 The riot began over Memorial Day weekend after 19-year-old Dick Rowland, a black shoeshiner, was accused of assaulting Sarah Page, the 17-year-old white elevator operator of the nearby Drexel Building. He was taken into custody. A subsequent gathering of angry local whites outside the courthouse where Rowland was being held, and the spread of rumors he had been lynched, alarmed the local black population, some of whom arrived at the courthouse armed. Shots were fired and twelve people were killed; ten white and two black.  As news of these deaths spread throughout the city, mob violence exploded. Thousands of whites rampaged through the black neighborhood that night and the next day, killing men and women, burning and looting stores and homes. About 10,000 black people were left homeless, and property damage amounted to more than $1.5 million in real estate and $750,000 in personal property ($32 million in 2019).