AS SEEN ON TV: FRANK JAMES 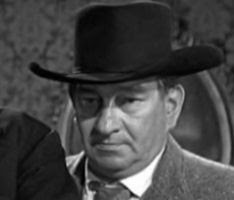 FRANK JAMES
AS SEEN IN:
'Maverick'

There's no way this thickset mobster type from 'The Wild Wild West' version of 'The Sopranos' could be the brother of Jesse James - not when the official Jesse James for Toobworld was played by Christopher Jones. (See the upcoming Two for Tuesday showcase for "As Seen On TV"....)

The reason why this escapee from the Bubbly Springs Asylum thought he was Frank James? Probably because of an onset of age-related dementia....