Speaking of 'The Man From U.N.C.L.E.' (Well, I was! Guido Panzini appeared in the episode "The Bow-Wow Affair". See?), TV Shows On DVD announced the release of the fourth season of 'The Fugitive' on their Facebook page:

The Fugitive - CBS/Paramount Announces 'The 4th and Final Season, Volume 1' on DVD! http://tvshowsondvd.com/n/14309

So what does that have to do with 'The Man From U.N.C.L.E.'? Watch this clip from the closing moments of the episode "The Walls Of Night" from that fourth season:

Dr. Richard Kimble had been in the Portland/Seattle area during that episode, heading for Canada. So with that final scene, he was probably still in the vicinity. But definitely he didn't cross the country to be in New York City for that denouement. 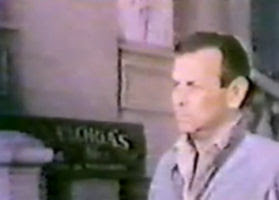 So this wasn't the Del Floria's Tailors near the United Nations, which served as the secret entrance to U.N.C.L.E. headquarters. But that was the headquarters - U.N.C.L.E. had stations located all around the world. The Del Floria's front must have been a common theme so that U.N.C.L.E. agents would recognize the location as a safe house.
I think Seattle would have been a logical choice for the location of an U.N.C.L.E. station - as the northernmost major city in the continental United States and as a seaport on the northern Pacific, it would served well during the Cold War for monitoring Soviet activity in that part of the world.