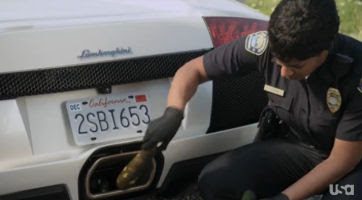 DETECTIVE JULIET O'HARA:
Vegetables in the tailpipe....
I don't know if that's brilliant or stupid.

BURTON "GUS" GUSTER:
Probably stupid.
"Psych"
No, it really was brilliant - Shawn Spencer used three zucchinis and a gourd shoved in the tailpipe of a Lamborghini to disable the vehicle so that the killer couldn't get away.

But he didn't come up with that idea on his own. I think he learned about it from reading his father Henry's collection of old police cases of interest from around the country. (You didn't know he had one? Oh, I'm sure it's somewhere in that house and it'll show up on the series... eventually.....)

In this particular case from the Homicide division of the Los Angeles Police Department, a Lt. Columbo shoved a potato into the tailpipe of Private Detective Brimmer's car so that it wouldn't start. That gave the detective the opportunity to plant false evidence in the trunk which allegedly would have implicated Brimmer in the death of Lenore Kennicutt; evidence which Columbo knew the investigator would have to come looking for.

Arthur Kennicut:
What would you have done if the car hadn't broken down? You couldn't set up this trap.
Lt. Columbo:
Well, I guess we would have found some other way. You know what this place reminds me of, just seeing all these cars? You know, in our neighborhood we had a bunch of jokers. I mean we were a real loud bunch of guys and we figured out a perfect way to put a car out of commission. You take a potato, you stick it in the exhaust pipe. Doesn't cause any damage but the car won't start. It was a terrible thing to do. And I got a feeling that the reason I became a cop was to make up for all those jokes I played when I was a kid.

Upon hearing that, Mr. Kennicut was tempted to check the tailpipe himself but finally he thought better of the idea.

Mr. Kennicut was a powerful and influential newspaper publisher in California; he would have made sure that the story was featured in his newspapers all throughout the state. And that's how Henry Spencer learned of it down in Santa Barbara.
SHOWS CITED:
'Psych' - "Shawn And Gus In Drag (Racing)"
'Columbo' - "Death Lends A Hand"
BCnU!
Posted by Toby O'B at 1:40 AM

I'm pretty sure it was yet another 1980s film reference. In this case, Axel Foley's "banana in the tailpipe" trick from "Beverly Hills Cop."

You should also Google "2SBI653" and see how many other shows have used that same prop license plate number.

Thanks, Andy; I'll do that! And since they didn't mention "Beverly Hills Cop" (which 'Columbo' also predates), I'm comfortable with sticking with 'Columbo', especially since they both share the same "universe".....

Thanks for checking in!

It's also the police woman's plated ID in the movie Constantine.