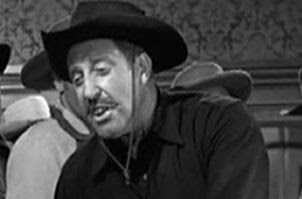 AS SEEN IN:
'Maverick'

From Wikipedia:
Charles Earl Boles (died 1888?), alias Black Bart, was an American Old West outlaw noted for his poetic messages left after two of his robberies (the fourth and fifth). He was also known as Charles E. Boles, C.E. Bolton, Charles E. Bowles, and "Black Bart."

A gentleman bandit, Black Bart was one of the most notorious stagecoach robbers to operate in and around Northern California and southern Oregon during the 1870s and 1880s. The fame he received for his numerous daring thefts is rivaled only by his reputation for style and sophistication.

I'd say the only reason we should eliminate this outlaw from consideration as the real Black Bart is that the venue for Foxy Smith's master plan was too far outside of Bart's established purview and most likely outside his comfort zone for the type of crime committed. (Black Bart would have rightly figured that his specialty of robbing stagecoaches would never need so many top professional gunslingers and bank robbers.)

Otherwise, Black Bart really hasn't been portrayed enough in Toobworld to establish any performance to be the definitive one. Ted De Corsia in "The Slowest Gun In The West" was more likely to be located in that alternate TV dimension that houses 'That's My Bush!' and 'The Secret Files Of Desmond Pfeiffer' - a world in which everybody is an idiot.

Black Bart's guest appearance on 'The Real Ghostbusters' is O'Bviously a candidate for the Tooniverse. And I don't know what to make of the special "The Wild & The West" which documented the differences between the real West and the "reel" West......

So we'll just say this appearance by Black Bart in the "Full House" episode of 'Maverick' is yet another escapee from the assumed asylum just outside of Bubbly Springs, Colorado....

Labels: Alternateevee, By Any Other Name, O'Bservations, Splainin 2 Do, Tooniverse, Wikipediaphile

That picture looks a lot like Frank Ferguson to me, but I could be wrong.

The Black Bart that I remember was Arthur Space on Stories Of The Century, Republic's Western Gangbusters from the '50s, which I believe you've mentioned her a time or three.

Hey, Mike! Thanks for checking in!

Yeah, it looked like Ferguson but sounded nothing like him. (As a big fan of character actors, he's right up there for me.) Maybe I'll check that scene again though just to make sure.

I saw him the next day in another 'Maverick' - "Three Queens Full", looking like a typical Ferguson character.....