TODAY'S TWD: "OUR TOWN" IN TOOBWORLD

"The Fall play this year will be Thornton Wilder's 'Our Town'.
I invite you all to come, be a part of this haunting tapestry
Of memory and dreams."
Mr. Webber
'The Wonder Years'

Paul Newman played George Gibbs in 'Our Town' back in the 1950s; and then at the tail end of his career, he played the Stage Manager in another TV production.

Several characters who live in Toobworld were also involved with the play by Thornton Wilder. In 1982, Woody Boyd performed as George in a community theatre production in Boston. Lisa Kudrow portrayed Emily Webb and Woody found it difficult to separate himself from the character when it came to dealing with her. ('Cheers' - "Two Girls For Every Boyd") 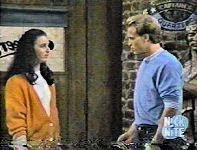 "I'm playing George Gibbs from 'Our Town',
Kind of a naive small town guy
Who's a little shy and sort of backward.
Can you believe they chose me?"
Woody Boyd
'Cheers'
Kevin Arnold, Winnie Cooper, and Paul Pfeiffer worked on their school production of the play - 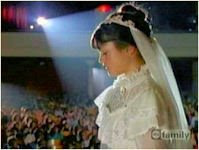 Winnie played Emily, Paul tried out for the stage manager (but couldn't even land the irate man in the audience with only one line), and Kevin thought he had it cushy working the spotlight. ('The Wonder Years' - "On The Spot")

Dr. Donald Westphall acted in a similar fashion as the Stage Manager, when he displayed serlinguistic tendencies and addressed the audience viewing at home when he conducted a tour of his hometown, Peterborough, New Hampshire. ('St. Elsewhere' - "Their Town")

BCnU!
Toby O'B
Norma Arnold:
"'Our Town'.... That's the one about the girl who falls in love and then she dies.
But she comes back, for one last visit to see her family?"
Karen Arnold:
"Mom..... 'Our Town' is an indictment
Of the meaninglessness of bourgeois middle-class existence."
Norma Arnold:
"Oh."
'The Wonder Years'
Posted by Toby O'B at 3:12 PM