TODAY'S TWD: "OUR TOWN" IN SKITLANDIA

Maybe I have a few ancillary TWDs related to Paul Newman left to go.....

Paul Newman appeared in two different productions of Thornton Wilder's "Our Town" on television. Skitlandia, the TV dimension for TV comedy sketches, had its own version of "Our Town". It was performed on 'Saturday Night Live' in January of 1976 with host Dick Cavett. Thanks to the phenomenal site dedicated to "Saturday Night Live Transcripts", here's the transcription of that sketch:

Our Town
Stage Manager...Dick Cavett
[fade from black onto spartan backstage set with standing lamp and a ladder. A solo flute plays, SUPER: "Our Town"]
[Stage Manager enters, and stands in front of the ladder. He wears a jacket, tie and hat, and carries a pipe from which he occasionally draws from. He speaks in an upstate New York or New
England accent].
Stage Manager: This play is called 'Our Town', and it was not written by Thornton Wilder. The name of the town is New York City, New York...it's just across the Jersey border, Longitude 73 degrees, 58 minutes, Latitude 44 degrees, 7 minutes. The time is January 31, 1976, [looks around] and it's a little before dawn.
If the air quality wasn't so poor, you could see the first streaks of light right over there through the twin trade towers. [sfx: a police siren starts to wail] The big street right around here is called Broadway...another is called 42nd Street....'course, the subway runs right underneath us.
Over there is the new methadone center...we're very proud of that. [audience laughs] And 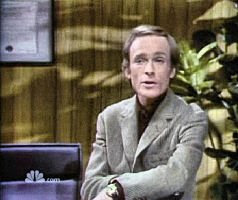 just above the leather bar is, uh, Vinnie Sabotino's massage parlor, where you can get a decent rub job for ten dollars. Next to that is the, uh, body paint studio, and uh [draws pipe], oh yeah, beside that is 'Sex Aid City', and on the corner is the adult bookshop. Let's see what they have there [peers at object supposedly at a distance] 'Torrid Tots Meet the Nympho-' [chuckles]. They always put black tape over the good parts.
[draws pipe] I, uh- I suppose you're wonderin' what those big mounds of garbage everywhere are. Fact is the sanitation workers went on strike a few months ago and it's been that way- [distracted, he chuckles] look at the size of that, would ya? Ha ha...looks more like a dog! Where was I anyway? Oh yeah, I was talkin' about strikes...my goodness, seems like they're all on strike now. We've got the transit workers, and the...teachers, the typesetters, the cab drivers. The ambulance drivers and the doctors and the milkmen, [sfx: roar of jet engines approaching] the gravediggers and the operators and the municipal- [notices engine noise, checks watch] Ah, that'd be Flight 646 from Boston, right on time...[sfx: boom]. Looks like the air controllers' strike went through too.
[draws pipe] Now, uh, those women that you see in the platform shoes and the microskirts standin' there in front of the fire station- well, that used to be the fire station but our mayor made some cutbacks...mostly police and fire department- they closed it down.
[sfx: woman's bloodcurdling screams] Well, I reckon that's old Mrs. Grossman getting raped and strangled in the alley. You probably wonderin' why I don't call the cops. Well, for one thing, the phone in that booth over there hasn't worked since Dewey was governor. And for another, that's how we do things here in Our Town, we tend not to get involved, you know...sorta let people go about their business. Like, uh, Rafer Jones over there. Good ol' Rafer, we- we just let him go about his business. Gosh, he's been pushing junk on this corner for more years than I care to remember. [calling off camera] Mornin' Ray!
Yep...well, it looks like the town's startin' to wake up now- [notices something on his shoe] Nghh, ha ha...gotta watch where you step in these New York streets, I tell ya [walks to side of ladder and wipes his foot on the lowest step].
Say, a sad thing happened last week to old, uh, Doc Andrew. You, you think a grown man would have more sense than to go traipsing around the park after sundown. Not Doc. He went out jogging, or something, and they found him next moring, stabbed 112 times. You might have read about it in the papers. [draws pipe] Never did find the feet...the hands were mailed back of course but that's life, I suppose. Least ways, that's how life is here in Our Town...population eight million, one-hundred ninety-five thousand, five hundred and sirty-thwix... five-hundred and sixty-two, I should say because we almost forgot about old Mrs. Grossman. [puts pipe in mouth, sfx: car horns] Well, I better be goin' if I wanna beat the mornin' rush hour home [takes pipe out]. Oh...I don't live here, I just work here; I live in Connecticut. Most everybody who can afford it lives in Connecticut or Westchester. [a beat] Even Valley Stream.
[turns to go, pauses] Anyway, uh, glad to say the weather's clearing up, although when it turns out to be a hot sunny day, it's a shame in a way because, uh, the garbage always smells wors on a hot sunny day, but anyway, we'll be seeing you, you have a nice day. [puts pipe in mouth, turns, and walks into the darkness behind].
BCnU!
Toby O'B
Posted by Toby O'B at 2:28 PM