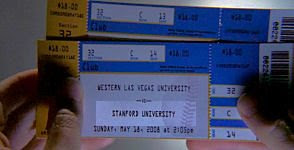 Stanford University had a good showing for itself last year in Toobworld, with characters connected to the college in the following shows:

And now, with the 2008 season underway, they've already got another mention in 'CSI'.

When Sara and Greg went to Warrick's apartment to get some of his personal belongings, Sara found tickets to a basketball game between Stanford and Western Las Vegas University - the fictional go-to school of higher learning on that show. If it's college-related, it happens at WLVU.

The tickets - as if the opening scene wasn't enough! - establishes that the season premiere picks up immediately following the events of last season's finale. Probably with next week's episode they'll be more synchronous with the current timeline. 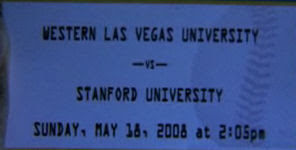