You'll see in my blogroll a listing for Win Scott Eckert's excellent site about "The Wold Newton Universe", which is filled with articles about the connections between hundreds of characters in the multiverse - from pulp novels, movies, TV shows, comic books. It was a concept first proposed by author Philip Jose Farmer in books like "Tarzan Alive!" and Win has provided an excellent showcase for such speculation.

There's a new entry in this type of crossover fiction and at its center is probably the most unlikely of heroines to bring together the classic characters of Conan Doyle, Burroughs, Melville, Haggard, Washington Irving, and the Cthulhu Mythos of Lovecraft - Becky Sharp, originally of "Vanity Fair" by William Makepeace Thackeray.

"The Eldritch New Adventures of Becky Sharp" by Micah S. Harris is a fun adventure story in which we also meet Sherlock Holmes, Tarzan, Ishmael, Professor Lidenbrock, She Who Must Be Obeyed, the Scarecrow of Romney Marsh, the dwarves from the story about Rip Van Winkle, and even King Kong! And overshadowing it all are the Great Old Ones.

I think I can safely state that "The Eldritch New Adventures Of Becky Sharp" will win the Toobit Award for novel most deserving of a TV adaptation. (A television mini-series would be best - there's just too much going on than could ever be fit into one movie!)

But if it was developed for Television, I'm afraid you'd never see it in the main Toobworld. It would have to be relegated to some alternate TV dimension, perhaps even rewarded with its own world. That's because even though many of those same characters exist in Toobworld, their TV productions are not mirror adaptations of the source material from which Micah has woven his tale.

For instance, Holmes, Ishmael, and Captain Clegg (Dr. Syn) existed in the correct time periods in their respective productions, but Tarzan was updated to the 1960s, rather than the Victorian/Edwardian period in the original Burroughs novel.

But if I could have that dream TV cast for a production of "The Eldritch New Adventures Of Becky Sharp", I'd stick with as many of the original actors as possible. (At least one of them is dead, yes, but like I said, it's a DREAM cast!) 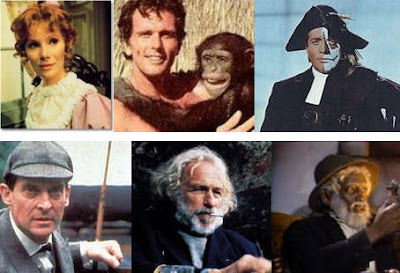 BECKY SHARP: Susan Hampshire from her Emmy-winning performance in 1972's version of "Vanity Fair". (There have been at least three TV productions so far.)
"LORD EUGENIDES" (TARZAN): Ron Ely from that 1960s TV series.
CAPTAIN CLEGG/PADRE PERDITIO (DR. SYN): Patrick McGoohan in the Disney three-part mini-series.
SHERLOCK HOLMES: Ronald Howard may have been on the air first, but Jeremy Brett is the definitive Holmes!
PROFESSOR LIDENBROCK: Pierre Richard played the underworld explorer in a French mini-series a few years back. He's meant to be younger in the book, but you go with what you've got. Other TV adaptations of the novel abandoned the Verne plot entirely and came up with new characters.
UNCLE REMUS: Garrett Morris, as seen in a sick sketch with "Mr. Mike" O'Donaghue on 'Saturday Night Live'. (And weren't all the sketches involving Michael O'Donaghue sick and twisted?)

The Dark Ones from Lovecraft's stories about the Cthulhu Mythos were invoked in a 'Night Gallery' vignette starring Carl Reiner. I'm not certain if Tulu was specifically mentioned, but if so it would be by its true name, Cthulhu. And Cthulhu has shown up over in the Tooniverse in an episode of 'The Grim Adventures of Billy And Mandy'

Two characters from "Moby Dick" figure in the story, with only of them actually appearing. Considering the age of Ishmael in this novel, I'd go with Richard Basehart from the movie, but as he looked as an old salt in an episode of 'Gunsmoke'. As played by Henry Thomas in the production from a few years back, we'd have to wait awhile for Ishmael to look the right age.

Queequeg of "Moby Dick" is mentioned often, but Becky never catches up with him. So he wouldn't be in this fantasy TV mini-series, but I think Lance Reddick would have been an excellent choice in the role..... 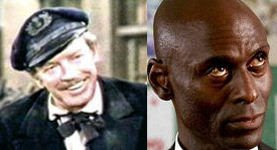 Captain Nemo also appears in the novel, but Toobworld has always gone more for the Disneyfied version of the character rather than for the Prince Dakkar as favored by Allan Moore in his graphic novel, "The League Of Extraordinary Gentlemen". So we could perhaps recast that role afresh, as we would with the Kaatskills dwarves, Tulu, King Kong, and She Who Must Be Obeyed.

If you enjoyed the graphic novel of "The League Of Extraordinary Gentlemen" by Allan Moore, you should find this novel to be of interest. And it has a great cover by Loston Wallace of Becky which reminded me of Frazetta's classic "Tits 'n' Lizards" cover for National Lampoon in a way. (I think it was that totem in the background....)

To learn more about the book, especially for how to purchase it, visit

Micah's site. You'll also find the first two chapters there as a sampler. Check it out!

Well, said Win. Toby did a great job on this one.

WOW! I am so pleased with this review and how you went the extra mile to cast Becky as a TV miniseries. What a treat! I'm flattered my book inspired you to such lengths! Good call on Susan Hampshire. By coincidence, this actress resembles one of Loston's rejected head designs.
I also enjoyed the review itself. I agree with Win's estimation -- an engaging overview -- Hey! I'd buy it after reading your review!
Can I link to your site from Becky's web page and/or Myspace page? Have you been to Becky's Myspace page? You'd get a kick out of it -- and learn who Becky's favorite actors who played Tarzan were!
Again, thanx for the sweet review. I'm very, very happy to have succeeded in entertaining a perceptive reader such as yourself who loves the source material as I do!

Becky has a MySpace page! Guess I'll have a new friend to add....