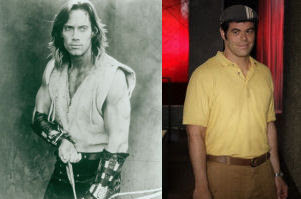 On the left is THE Hercules of Toobworld, as seen on 'Hercules: The Legendary Journeys'. On the right, that's Leo Francisi of the new CW show 'Valentine, Inc.'. And apparently, he's supposed to be Hercules as well. (At one point, Aphrodite called him "Hercules Leonardo Johnson". But that was in the pilot, so maybe his name has been altered again.)

Toobworld Central accepts that gods can change their appearance, so for any other Greek "deity", 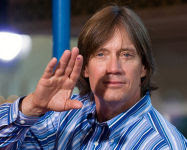 I could accept the recastaway. However, 'Hercules: The Legendary Journeys' established that the original Hercules is still around, living in Los Angeles, and is known today as Kevin Sorbo.

This is easy enough to splain away - Leo Francisi is the son of the original Hercules. I'm sure Hercules has taken lovers and sired children over the millennia. Leo could even be several generations separated from the founder of the family tree.

And if they get more specific about his background on 'Valentine, Inc.' to the point where he is credited with the actions of the original, we can splain that away as well. Leo was just emulating his famous ancestor. And if they say he was alive back in the Age of Legend, fine. He's an immortal; no problem!

You can get away with a lot with the gods!

Labels: As Seen On TV, By Any Other Name, Missing Links, Splainin 2 Do, Theories of Relateeveety, Zonks

Heracles, aka Hercules, managed to impregnate 50 women in one night; he's credited with siring (via some of his descendants) one of the royal households of Sparta; he had two wives on Earth and one on Olympus, although he killed while mad under Hera's influence his children by his first wife (H:TLJ changed that so that Hera killed them). So it's more than plausible.

In sixth grade, I discovered Edith Hamilton and found an outlet for my fantasies. Instead of cops and robbers, cowboys and Indians, I had the other kids playing Greek gods during recess. (I was Hermes.)

Sister Theresa Gertrude was not amused......