I don't remember if it happened as much in the first season, but this year 'Mad Men' has anchored each episode with either a day of observance or an historical event in 1962. There's been the crash of American Airlines Flight One into Jamaica Bay, the last three Sundays of Lent.... And with the second episode, it was a combination of both - Valentine's Day and Jackie Kennedy's televised tour of the White House.

"Six Month Leave" was set after August 5, 1962, indicated by everyone's obsession over the tragic death of Marilyn Monroe.

Don Draper was seen looking at the headline about her death in the New York World-Telegram. It was a good paper to use, as it helped nail the time period. In a city which used to have nine daily papers (at least), the New York World-Telegram was the last to fold, leaving the Big Three: the Times, the Post (ugh), and the Daily News. (Of course, in Toobworld there are still at least three more - the Ledger, the Gazette, and the Chronicle.)

The World-Telegram enjoyed a reputation as a liberal paper for some years after the merger, based on memories of the Pulitzer-owned World. However, under Scripps Howard the paper moved steadily to the right, eventually becoming a conservative bastion. 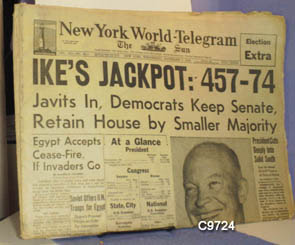 In 1950, the World-Telegram acquired the remnants of another afternoon paper, the New York Sun, to become the New York World-Telegram and Sun. (The writer A.J. Liebling once described the "and Sun" portion of the combined publication's masthead as resembling the tail feathers of a canary on the chin of a cat.)
Early in 1966, a proposal to create New York's first joint operating agreement led to the merger of the World-Telegram and Sun with Hearst's Journal American. The intention was to produce a joint afternoon edition, with a separate morning paper to be produced by the Herald Tribune. But when strikes prevented the JOA from taking effect, the papers instead united in August 1966 to become the short-lived New York World-Journal-Tribune, which was nicknamed "The Widget."
The World-Journal-Tribune lasted only until May 5, 1967. Its closure left New York City with three daily newspapers: The New York Times, the New York Post, and the New York Daily News.

Labels: As Seen On TV, Outside the Box, Special Guest Appearance, Tiddlywinkydinks, TV timeline, Twipped from the Headlines