This month's Fanficcer's Friend is mostly written by my friend Michael [at left], who has lately come to love 'Life On Mars' and its sequel 'Ashes To Ashes', and who already was a big fan of 'Prime Suspect'.

The year is almost up, but even so there will be folks out there with no clue as to what "Fanficcer's Friend" is here at "Inner Toob". Basically, it's a monthly post in which I supply a picture from a theatrically released movie (or some other source outside of television) which could be the inspiration for any crossover fan fiction you might care to write.

The only type of picture I wouldn't offer up would be from TV productions, because those already took place in Toobworld. For instance, a picture of Gene Barry and Peter Falk together in the 'Columbo' pilot movie "Prescription Murder" could not be used as an example of Amos Burke ('Burke's Law') and Daniel J. O'Brien ('The Trials Of O'Brien') together. That must remain a picture of Dr. Flemming and Lt. Columbo.

So here's what Michael had to suggest this month with his offering of two stills from 2003's "Calendar Girls". (The third is a frame grab I did from an online clip.)

The timeline I have gathered so far is 'Life on Mars' was 1973 and 'Ashes to Ashes' is 1981; Tennison becomes DCI in 1991. We just need her to be hit by a car in 2010 (since her last case so far was in 2006). How we would fit Gene Hunt in is a little harder because she becomes superintendent in series 3 (Lets say roughly 1993 or 1994). We should also note that series 5 takes place in Manchester and one scene in particular is set in the same swimming pool used in 'Ashes to Ashes'. We will have to watch it together, and then show you the scene in 'Prime Suspect'. It's uncanny. 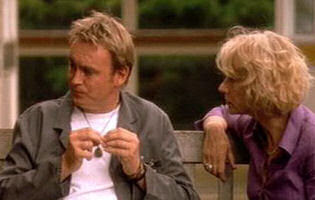 Just throwing it out there for you. I give you the pieces, you connect the dots. Also of note, she can't run into Alex Drake at any point because by 1991 she is the first Female DCI EVER. She notes she has barely met any females in the force.

She seems to come from the Midlands, where as Alex Drake (as far as we know) has always worked out of London. As for meeting Sam Tyler in Manchester, that's a whole other blog you could do, since Gene Hunt was promoted to London by 1981. I hardly think he would have gone back to Manchester by the time Tennison gets there in 1995. 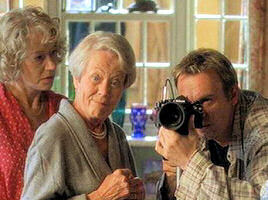 ALTHOUGH!!!!! She could have met Alex Drake in London since she was working in 2006 out of London and so was Drake. But since I have yet to find any still of them together, it's just a theory. Alex Drake was in forensic psychology and she very well may have been called in by Tennison for some of her cases. 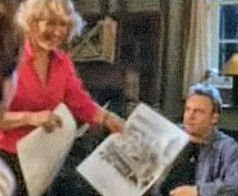 (and Ray Carling and Chris Skelton) in 1991 or so, - which could be caused by a fall after resorting to drink again - she should narrowly avoid running into herself at that time. I think with the use of computer technology, the modern day Helen Mirren could be inserted into old scenes of her playing Tennison in the first series, just missing her in corridors and the like.

Wait a minute..... I'm talking as though this could actually be a series! I guess Michael's really got me enthused for the idea of this project. The intent is for the fan fiction writers out there to take this idea of Jane Tennison meeting Gene Hunt in a 1991 coma dream/hallucination of madness/Time travel adventure and write a story about it.

If any of you out there actually attempt it, send me a copy! (And I'll make sure Michael sees it as well!)

PS
With one of the pictures supplied by Michael, Annette Crosbie would be the guest star.....
Posted by Toby O'B at 4:21 PM

Annette Crosbie? "I don't believe it!"