PUTTING A JOHN IN HAYNES 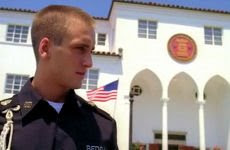 When Alan Sepinwall blogged about "Goodbye To All That" (the latest episode in 'The Sarah Connor Chronicles'), Emerald Liz said...

My main takeaway from this episode was thinking "Hmm, getting John serious military training rather than this rag tag leaping around piecemeal crap. How smart would it have been to try and make that a serious goal rather than a nifty side effect from this weeks plot line?"
It does seem like John's future goals would be better suited if he went to a military academy, rather than giving him the semblance of a normal life by enrolling him at a public high school.
But Presidio Alto, however, is too far away from Los Angeles to suit Sarah's needs*. Sarah should get John enrolled (under an assumed name of course) at the Haynes Academy, just outside of Los Angeles proper. We saw the Haynes Military Academy in the 'Columbo' episode "By Dawn's Early Light".
O'Bviously the academy is not run by Colonel Lyle C. Rumford anymore, since he was arrested 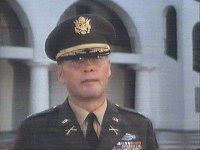 (and most likely convicted) of the murder of the man who owned the school. (And besides, since Patrick McGoohan was playing the role as an older man. Thirty years on, one way or another, Rumford is most likely dead in Toobworld.)
William Haynes had plans to turn Haynes Academy into a co-ed school. Those plans could still have come to fruition and yet still be a military academy, what with so many women now in the armed forces. Therefore, they could get Cameron enrolled into the school as well to keep an eye on John.
Just an idea.....
BCnU!
Toby O'B

*Presidio Alto could be located near Alto Coma, California, where UBS broadcast 'America 2Night' back in the 70s with Barth Gimble as host.
Posted by Toby O'B at 1:19 PM