During the flashback segment in this week's episode of 'True Blood', we were introduced to the backwoods woman who "embraced" Lt. William Thomas Compton in the kindred of vampirism back in the mid-1860s. She told him, while he still thought her to be a mortal woman, that her own husband served in the 13th Infantry at the Battle of Shiloh under Colonel Gibson.

Lt. Compton made a slight grimace and turned away; from that we know that even if he didn't know of her husband personally, he must have known what happened to him. And it couldn't have been good.

Here's an excerpt from an historical narrative of the Battle of Shiloh:

Back at the sunken road, Confederate General Hardee had relinquished command to General Bragg who had been ordered to break that Union line at all costs. Bragg, who by nature was aggressive and often overbearing, was determined to drive the Federals to the banks of the Tennessee River, but didn't know for sure how he was going to do it. He ordered Colonel Randall Gibson to take his First Brigade and attack the center of the Federal line at the sunken road and to continue to attack until he either captured, routed or destroyed Prentiss' men.
At about 12:30, Colonel Gibson ordered the first assault on the sunken road. The Federals responded with cannon fire until the Confederates were within a few yards, then opened up with a hail of musket balls. The Confederates fell back, regrouped, fired a volley and charged again. As entire companies fell, more were brought up to charge the Federal position. Tree limbs were shattered by cannon balls and exploding shells. Bark was torn off by musket fire and thrown through the air like shrapnel. Both sides were being torn apart, but the Confederates were still unable to break the Union line.
Wounded Confederates made their way to the comrades in the rear and told of the carnage on the line. They told of the blood and the bodies along the old road, and the sound of the bullets whizzing through the trees. They said it sounded like a swarm of hornets passing over their heads, and soon the sunken road had a new nickname. It would go down in the history of the Civil War...and in the history of the 23rd Missouri Infantry...as "The Hornet's Nest".
By 2:30 in the afternoon, Gibson's brigade was all but shattered. Bragg ordered more men forward and told Gibson to continue the attack. More attacks were made on the Hornet's Nest, but the Federals continued to hold. 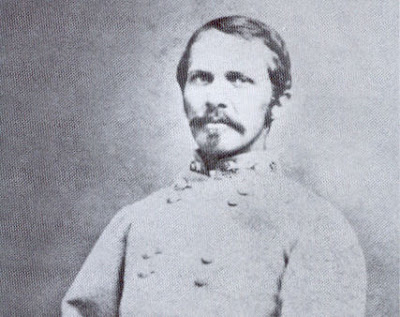 Col. R. L. Gibson, Thirteenth Louisiana Volunteers, commanding at the battle of Shiloh the First Brigade of Ruggles' division, asks for a court of inquiry into his official conduct upon that occasion, and bases his application upon the allegation that General Bragg, in his report of the battle, does him injustice. I have examined the report carefully, and find the first reference of General Bragg to Colonel Gibson to be on the fourth page, and in the following words:
In moving over the difficult and broken ground the right brigade of Ruggles' division, Colonel Gibson commanding, bearing to the right, became separated from the two left brigades, ]caving a broad interval. Three regiments of Major-General Polk's command opportunely came up and filled up the interval.
The second reference is upon the fifth page, where, after speaking of General Hindman's command, the following remarks occur:
Leaving them to hold their position, I moved farther to the right and brought up the First Brigade (Gibson) of Ruggles' division, which was in rear of its true position, and threw them forward to attack this same point. A very heavy fire soon opened, and after a short conflict this command fell back in considerable disorder. Rallying the different regiments by means of my staff officers and escort, they were twice more moved to the attack, only to be driven back by the enemy's sharpshooters occupying the thick cover. This result was due entirely to want of proper handling.
These are the only specific references in the report to Colonel Gibson or his command.
For the full collection of reports back and forth between Colonel Gibson and his superiors, with supportive letters from those under Gibson's command, check this link.

General Gibson was later an agent for Paul Tulane in founding Tulane University, of which Gibson was the first president of the board in 1885. He was elected (but not seated) as a Democrat in the U.S. House of Representatives in 1872; he was reelected and seated two years later and served continuously until 1882. From 1883 to 1892, he served in the U.S. Senate.
BCnU!
Toby O'B
Posted by Toby O'B at 1:53 PM

Labels: As Seen On TV, Life During Prime-Time, Outside the Box, Reali-TV, TV timeline