"Real Life is March."
from the movie "Leap Day Willliams"
as seen in '30 Rock'

I made a pledge that when a deserving real-worlder died, a member of the League of Themselves with enough televersion credits to their name, they would be inducted immediately into the TV Crossover Hall of Fame. 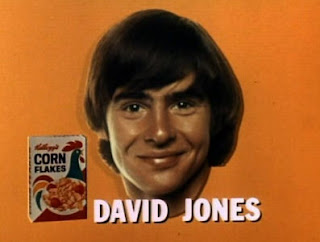 Sadly that day has come for Davy Jones, formerly a member of the Monkees, aka the Pre-Fab Four, and the greatest rock and roll band to be created for Toobworld.

DAVY JONES, MONKEES HEART-THROB, DIES AT 66
Davy Jones, the singer for the Monkees perhaps best known for his vocals on “Daydream Believer,” died on Wednesday at his home in Indiantown, Fla. He was 66.

The cause was a heart attack, according to the medical examiner’s officer there and a spokeswoman for the singer.

Mr. Jones, a former jockey and stage actor, was an important member of the first and arguably the best of the pop groups created for television to capitalize on the success of the Beatles. Though they were not taken seriously at first, the Monkees made some exceptionally good pop records, thanks in large part to the songwriting of professional songwriters like Neil Diamond and Tommy Boyce.

As himself, apart from the Monkees, Davy Jones racked up more than enough TV appearance credits to warrant inclusion in the TV Crossover Hall of Fame. I'm just sorry it took his death to prompt me to do so.

Of course, first and foremost, we have to include his signature TV series 'The Monkees' which also pulls in the movie "Head" which served as a spin-off of sorts. (And there's a lateral connection within the series to 'Batman', when another Hall of Famer, the Penguin, attended one of their shows.)

Among his other qualifications:

Sabrina, the Teenage Witch
Dante's Inferno (1997)
Hilda's punitus spell illness involves several things she says including figures of speech, appearing in physical form. These include Davy Jones of the Monkees when Hilda feels like she has "a monkey on her back".

Herman's Head
The One Where They Go on the Love Boat (1992)
The office workers go on a trip to the Bahamas - Herman has to deal with Elizabeth, who happens to be on board, while Louise gets to indulge her long-time infatuation for Davy Jones of the Monkees.

Probably the most famous of all his guest appearances: 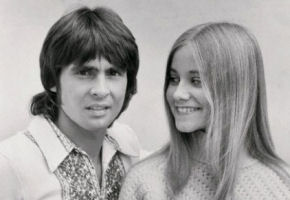 The Brady Bunch
Getting Davy Jones (1971)
Marcia promises the Davy Jones fan-club that she will get the famous star to appear at the prom, but the only problem is that she has no way of contacting him.

This next one is a theoretical appearance but I think it can work.....

Davy Jones appeared in three episodes of 'Z Cars', as three different characters. Two of them have names, but in "On Watch - Newtown", he was identified only as "Boy Footballer."

Why couldn't that boy footballer have been Davy as a young boy? 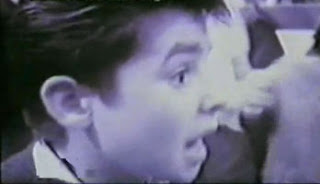 (The picture here from 'Z Cars' is from another episode, but I'm sure he wasn't too far off the mark as the boy footballer.)

So Toobworld Central is including that episode as a valid contribution.

Z Cars
On Watch - Newtown (1962) … Boy Footballer (as David Jones)
Both crews are forced to realize the narrow margin between life and death on a busy night in which Barlow and Twentyman miss one crime and catch two criminals. 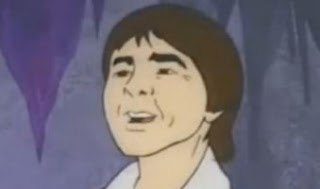 Davy Jones also appeared in the Tooniverse, but I think it's only the Scooby-Doo movie that counts as being his "tooniversion". (If I remember correctly, his "Davy Jones" in 'Spongebob Squarepants' was an in-joke about the infamous legend from the watery depths.)

SpongeBob SquarePants
– SpongeBob vs. the Big One (2009) 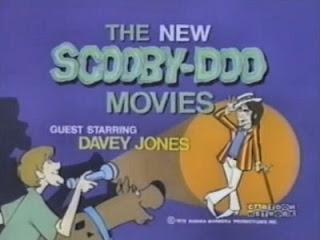 And so we welcome Davy Jones into the TV Crossover Hall Of Fame, even as we bid him adieu in the real world. But for more on that aspect, I'd like to share the thoughts of his former band-mate, Michael Nesmith....

All the lovely people. Where do they all come from? So many lovely and heartfelt messages of condolence and sympathy, I don’t know what to say, except my sincere thank you to all. I share and appreciate your feelings. But let’s not get ahead of ourselves here. While it is jarring, and sometimes seems unjust, or ...strange, this transition we call dying and death is a constant in the mortal experience that we know almost nothing about. I am of the mind that it is a transition and I carry with me a certainty of the continuity of existence. While I don’t exactly know what happens in these times, there is an ongoing sense of life that reaches in my mind out far beyond the near horizons of mortality and into the reaches of infinity. That David has stepped beyond my view causes me the sadness that it does many of you. I will miss him, but I won’t abandon him to mortality. I will think of him as existing within the animating life that insures existence. I will think of him and his family with that gentle regard in spite of all the contrary appearances on the mortal plane. David’s spirit and soul live well in my heart, among all the lovely people, who remember with me the good times, and the healing times, that were created for so many, including us. I have fond memories. I wish him safe travels.
- Michael Nesmith

Labels: Alternateevee, As Seen On TV, Hall of Fame, Hat Squad, League of Themselves, Life During Prime-Time, O'Bservations, Special Guest Appearance, Tooniverse, Twipped from the Headlines

Don't forget his most infamous appearance--as the Artful Dodger in a scene from the musical Oliver! that was on the Ed Sullivan Show on February 9, 1964...

Also was on My Two Dads, Boy Meets World, Coronation Street, a radio show, also played Fagin, Oblio in The Point, Michael in Peter Pan, was in Pickwick, no doubt more, did lots of charity despite being swindled