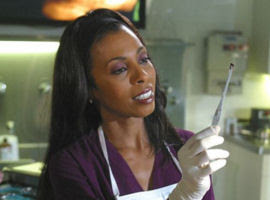 During her six year stint (more, counting the time before the show started) with the Miami Crime Scene unit, as a medical examiner, Dr. Alexx Woods never mentioned that she had a twin sister.

The family name must have been Saunders when the twins were growing up in New York City, unless sister Beverly was married twice. (We already knew that Woods was Alexx's married name.)

When we first met Beverly Saunders, she was looking up her old boyfriend, Monte "Doc" Parker, where he worked as a paramedic. Her visit brought back memories for Doc about how he accidentally killed a friend in an argument over a girl.

Beverly is in the same field as her twin sister, but she was geared more towards the administrative side of the job. Always with an eye towards advancement, Beverly eventually rose to the position of Philadelphia's Health Commissioner.

Since that visit with Doc in an attempt to exorcise the demons of her personal history, Beverly had married a man named Travers. I get the feeling it couldn't have been a happy marriage, since Commissioner Travers acted like a real harpy, an out-and-out bitch. She was the polar opposite to her twin sister Alexx, who was warm and maternal and caring for the victims she had to examine.

Labels: By Any Other Name, Double Vision, Game of the Name, Life During Prime-Time, Location Shot, Missing Links, O'Bservations, Splainin 2 Do, Tele-Folks Directory, Theories of Relateeveety