AS SEEN ON TV: JIM 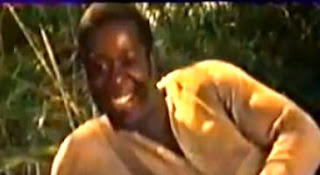 AS SEEN IN:
'Huckleberry Finn And His Friends'

AS PLAYED BY:
Blu Mankuma 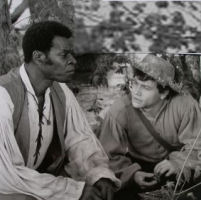 AS SEEN IN:
"The Adventures Of Huckleberry Finn"

AS PLAYED BY:
Brock Peters

From Wikipedia:
Jim is one of two major fictional characters in the classic novel Adventures of Huckleberry Finn by Mark Twain. The book chronicles the journey of Jim and Huckleberry "Huck" Finn down the Mississippi River in the antebellum Southern United States.

Jim is an adult African American who has escaped from slavery and is trying to reach freedom. Huckleberry Finn, a 11-year-old Caucasian male, has been taught that slavery is natural and that abolitionism is wicked; nevertheless, after befriending Jim, he decides to help Jim escape.

Jim may have been modeled after one or more slaves, or on the "shrewd, wise, polite, always good-natured ..." formerly enslaved African-American George Griffin, whom Twain employed as a butler, starting around 1879, and treated as a confidant.

Jim is simple and trusting, even gullible. But Jim’s simple nature belies a common sense that helps him choose the right path for Huck and him to follow. Jim does not recognize the duke and the king as frauds. Jim becomes an authority figure in contrast to Huck's abusive father, who can be appreciated for his wisdom and intelligence.

From the source;
I went to sleep, and Jim didn't call me when it was my turn. He often done that. When I waked up just at daybreak he was sitting there with his head down betwixt his knees, moaning and mourning to himself. I didn't take notice nor let on. I knowed what it was about. He was thinking about his wife and his children, away up yonder, and he was low and homesick; because he hadn't ever been away from home before in his life; and I do believe he cared just as much for his people as white folks does for their'n. It don't seem natural, but I reckon it's so. He was often moaning and mourning that way nights, when he judged I was asleep, and saying, "Po' little 'Lizabeth! po' little Johnny! it's mighty hard; I spec' I ain't ever gwyne to see you no mo', no mo'!" He was a mighty good nigger, Jim was.

But this time I somehow got to talking to him about his wife and young ones; and by and by he says:

"What makes me feel so bad dis time 'uz bekase I hear sumpn over yonder on de bank like a whack, er a slam, while ago, en it mine me er de time I treat my little 'Lizabeth so ornery. She warn't on'y 'bout fo' year ole, en she tuck de sk'yarlet fever, en had a powful rough spell; but she got well, en one day she was a-stannin' aroun', en I says to her, I says:

"She never done it; jis' stood dah, kiner smilin' up at me. It make me mad; en I says agin, mighty loud, I says:

"En wid dat I fetch' her a slap side de head dat sont her a-sprawlin'. Den I went into de yuther room, en 'uz gone 'bout ten minutes; en when I come back dah was dat do' a-stannin' open YIT, en dat chile stannin' mos' right in it, a-lookin' down and mournin', en de tears runnin' down. My, but I WUZ mad! I was a-gwyne for de chile, but jis' den—it was a do' dat open innerds—jis' den, 'long come de wind en slam it to, behine de chile, ker-BLAM!—en my lan', de chile never move'! My breff mos' hop outer me; en I feel so—so—I doan' know HOW I feel. I crope out, all a-tremblin', en crope aroun' en open de do' easy en slow, en poke my head in behine de chile, sof' en still, en all uv a sudden I says POW! jis' as loud as I could yell. SHE NEVER BUDGE! Oh, Huck, I bust out a-cryin' en grab her up in my arms, en say, 'Oh, de po' little thing! De Lord God Amighty fogive po' ole Jim, kaze he never gwyne to fogive hisself as long's he live!' Oh, she was plumb deef en dumb, Huck, plumb deef en dumb—en I'd ben a-treat'n her so!"