REID BETWEEN THE LINKS

For those of you who watched the whole episode, you might be surprised that there was no grisly twist, no shock ending, as one might expet from an anthology series that gave us "Lamb To The Slaughter", "Bad Actor", and "Man With A Problem".

This was mostly a character study, almost a two person playlet, set in a world of rural despair and on first glance one might think it didn't have anything of significant value for Toobworld.

But you'd be wrong.

At first, as we met Millie Wright in her isolated cabin, I was tempted to place the locale for the episode in the "Land Of The Giants", like a certain T-Zone episode. (No spoilers on that one - it's just too good!)

But that would be too complicated for the splainin.

This remote, rural farm community is probably set at the turn of the 20th Century - people are still using horse & buggty as the main mode of transportation, but they also have telephone service.

Because of the participation of one particular actress, I'm going to claim that "A Jury Of Her Peers" took place in the outer environs of Chicago around 1905. First off, according to the Encyclopedia of Chicago, 100,000 residences had telephone service in the greater Chicago area by 1905.  (I always say - TV is a teaching tool!)

If it is located in Illinois, but outside Chicago due to its rural setting, I'm going to claim that it's the town of Salem, founded in 1802 - home to the Hortons and the Bradys... as seen in 'Days Of Our Lives'. 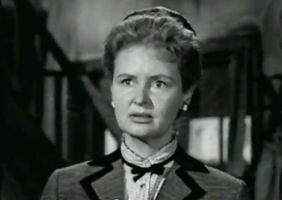 Out of all pozz'ble options, I chose Salem because of Mary Peters, the wife of Sheriff Henry Peters. Mrs. and Mrs. Peters arrived in town five years before, according to this episode, and although their own home-life was not central to the story, I'd like to think Henry and Mary had children - or at least a daughter, who would soon be old enough to marry (if she wasn't already.) 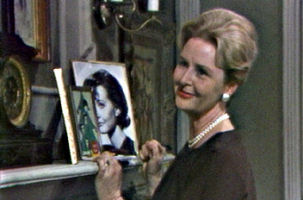 That daughter could have married a local lad by the name of Grayson. And while that could lead to theories of relateeveety connecting them to Dick Grayson (of 'Batman') and ultimately to Amanda Grayson (of 'Star Trek'), my concern is more immediate - these Graysons would have a daughter of their own by 1914 - whom they named Alice.

And Alice would be the center of life there in Salem, of all that would occur during the 'Days Of Our Lives' until 2010. (When her death was acknowledged on the soap opera.) 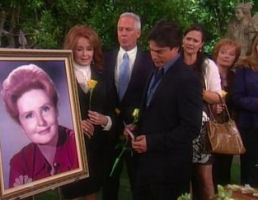 I make this claim of relateeveety based on the resemblance between Mary Peters and Alice Grayson Horton - due to Frances Reid having played both roles.

(This theory of relateeveety post is dedicated to my Auntie Anne, who is a big fan of 'Days Of Our Lives'.  So is her daughter-in-law, Denise, probably even more fanatically so, but blood will out.  Sorry, Denise!)