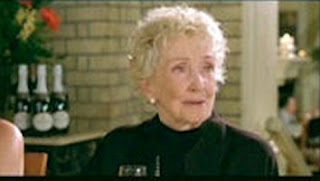 Before her "death" in 2010 (mentioned in an episode of 'NCIS'), Mrs. Victoria Mallard told Abby about her sister Gloria - and about how much Abby reminded her of that sister. But the mother of Dr. Ducky Mallard never mentioned that she had another sister whose married name was Carol Flemming.

By the time we met Victoria Mallard in the episode "Meat Puzzle", she was in her nineties and already on that downward slope into dementia. But there wasn't any reason why she should have mentioned Carol to Abby or to either Tony or Kate who were acting as her bodyguards/babysitters. And she could have mentioned it during the many hours not actually seen onscreen, perhaps even during a commercial. 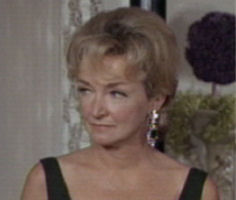 Dementia doesn't have to be the reason why the subject of Carol never came up. It could just be that the topic was too painful for Mrs. Mallard to relive. About forty years before, Carol Flemming had been murdered by her husband, psychiatrist Dr. Ray Flemming - staged in such a way so that it looked like she had stumbled on a burglary of her home when she returned unexpectedly.

Dr. Flemming had a very convincing alibi, not that it ever mattered - the homicide detective on the case was one Lt. Columbo.....

The inspiration for this theory of "relateeveety"? The late Nina Foch played both roles.

Labels: As Seen On TV, Double Vision, Game of the Name, Life During Prime-Time, Splainin 2 Do, Tele-Folks Directory, Theories of Relateeveety