THE ADVENTURES OF HUCKLEBERRY FINN IN BLACK TOOBWORLD

We're down to the last two days of Black History Month - one day longer than in most years. And because the ASOTV showcase was about literary TV characters, it was easier than finding the historical figures of years past when it came to the "Black Friday" editions. (Even with the week of 'Wishbone' characters, we tied into a legend from African folklore.)

Because today's entry is the escaped slave Jim (from Mark Twain's classic "The Adventures Of Huckleberry Finn"), I thought today would be perfect for sharing this museum piece.....

It looks like the earliest TV adaptation of the greatest American novel ever written is from 1953 as an episode of 'Excursion' starring Burgess Meredith, Eddie Albert, Clifford Tatum Jr., and Sugar Ray Robinson as Jim. (It was basically just a dramatization of the scenes with the King and the Duke, but as much of life within Toobworld occurs off-screen, this is accepted as the official version.)

And that's a good thing, because there's no way that I could allow this 1955 version to be accepted as the official entry for Earth Prime-Time.

Imagine that! To have the audacity to remove completely one of the two most integral characters from the novel! 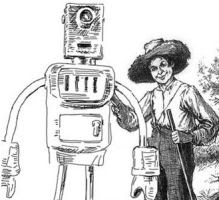 There's been a hue and cry in recent years about removing the "N" word from future editions of the tale. Apparently, there are published versions out there that replace it with the word "slave" and even with the word "robot"! (An early prototype of "Boilerplate", perhaps?)

Turning Jim into the the precursor of James Baldwin's "The Invisible Man" won't fly for the main Toobworld; it's unacceptable.

But there is a TV dimension where this adaptation could be an integral part.

Earth Prime-Time Ebony.
(It's a name in progress. I may just stick with Black Toobworld. It's got a 70's Marvel Comics feel to it. But I'm open to suggestions.....)

This may seem strange, since the Black Toobworld is populated by classic TV characters who are blacks in this dimension - 'Kojak', 'Barefoot In The Park', 'The New Odd Couple'.... Even theatrical films have been absorbed into this dimension - "The Honeymooners", "The Wild, Wild West", and "The Hitch-Hiker's Guide To The Galaxy".

So why would a black TV dimension want to have a production of "The Adventures Of Huckleberry Finn" which cut out the greatest black literary character of all time?

The answer would lie in how the Black Toobworld came to be.....

This past weekend, I offered up a couple of video examples of the character 'Karen Sisco' as seen in the French and Spanish TV dimensions. The raison d'etre for those two dimensions stem from alterations to historical events which would have given each nation a dominance over the world in its timeline. For the Spaniards, it would have been a victory for the Spanish Armada. For the French, a triumph for Napoleon over Wellington at Waterloo. (And both events could have been triggered by the Meddling Monk from 'Doctor Who'.)

So without slavery in their historical background, the citizens of Black Toobworld had a better chance becoming more prominent in America because they came to this country of their own free will.

I think the theory is valid, so I'm sticking to it. It's not like Jim was wiped out of existence by stepping into a machine like Peter Bishop did on 'Fringe'!