THE POTUS VS THE VPOTUS 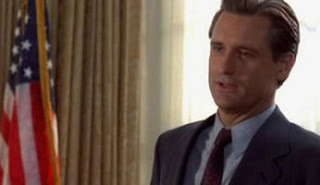 Bill Pullman will once again be playing a US President, although this time in a sitcom. (The last time was in the movie "Independence Day".) He'll be playing President Dale Gilchrist - seen by the Nation as an heroic ex-military figure, but privately he can barely control his disfunctional family.

There would have been the perfect alternate TV dimension for this series and there may yet be a chance it can be squeezed into there if the "need" arises. (So far, this is just a pilot and there is no firm commitment it will be broadcast, although NBC will face stiff penalties if it doesn't.)

Long before it goes on the air, HBO will have already begun showing 'Veep' starring Julia Louis Dreyfuss as former Senator Selina Meyer, the new Vice President of the United States. 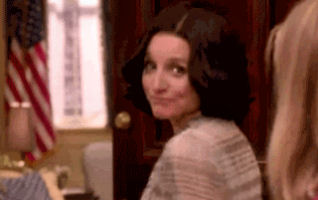 Depending on their individual takes on particular situations (not just current events but La Triviata like TV shows and movies mentioned), both 'Veep' and '1600 Penn' may be vying for the same spot on the timeline. And I think the names of the president in 'Veep' and the Vice President in '1600 Penn' will be mentioned, if they are not seen outright on each show. So it's not feasible to hope that Louis-Dreyfuss' 'Veep' could be one heartbeat away from the Presidency should anything happen to President Gilchrist.

And because of those same timeline markers, I don't think we can place '1600 Penn' immediately following 'Veep' on that dimension's timeline. So it probably means it has to be shunted off to a whole new TV dimension.

If it ever reaches the NBC schedule, that is.....

PS:
And because they're both comedies, neither one would be a threat to the new series 'Scandal' in its alternate dimension.
Posted by Toby O'B at 12:30 AM