Pete Matheson had been the business partner of Congressman Delancey from New York City. One of their shadier deals was in danger of being exposed, so Matheson ordered a professional hit on Delancey. That way he could blame the Congressman and claim that he had no knowledge of it, and Delancey wouldn't be able to refute him.

The kiling was made to look like an assassination by a disgruntled man out of work (for which Delancey was responsible.) And it would have worked had it not been for the meddlesome Mr. Finch and Mr. Reese. Thanks to the all-seeing machine created by Finch, they quickly determined that Pete Matheson was their new 'Person Of Interest'.

The eventual arrest of Pete Matheson must have been a big disappointment to his father, O'Bviously. And it's at this time that Toobworld Central is going to make the claim that Pete Matheson was the son of Senator Richard Matheson (as seen in several episodes of 'The X-Files'.) 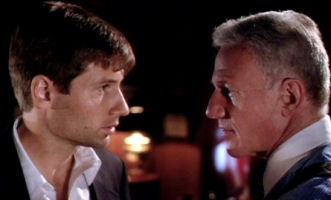 In fact, it was probably through his father that Pete Matheson first met Congressman Delancey.....