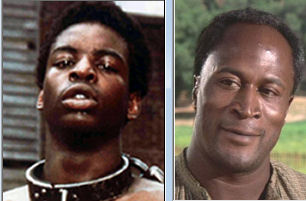 From Wikipedia:
"Roots: The Saga of an American Family" is a novel written by Alex Haley and first published in 1976. It tells the story of Kunta Kinte, an 18th-century African, captured as an adolescent and sold into slavery in the United States, and follows his life and the lives of his descendants in the U.S. down to Haley.

The release of the novel, combined with its hugely popular television adaptation, 'Roots' (1977), led to a cultural sensation in the United States. The novel spent 46 weeks on The New York Times Best Seller List, including 22 weeks in that list's top spot. The last seven chapters of the novel were later adapted in the form of a second miniseries, 'Roots: The Next Generations', in 1979.

Brought up on the stories of his elderly female relatives—including his Grandmother Cynthia, whose father was emancipated from slavery in 1865—Alex Haley purported to have traced his family history back to "the African," Kunta Kinte, captured by members of a contentious tribe and sold to slave traders in 1767. For generations, each of Kunta's enslaved descendants passed down an oral history of Kunta's experiences as a free man in Gambia, along with the African words he taught them.

Haley researched African village customs, slave-trading and the history of African Americans in America—including a visit to the griot (oral historian) of his ancestor's African village. He created a colorful and fictional history of his family from the mid-eighteenth century through the mid-twentieth century, which led him back to his heartland of Africa.

Kunta Kinte (also known as Toby Reynolds) is the central character of the novel "Roots: The Saga of an American Family" by American author Alex Haley, and of the television miniseries 'Roots', based on the book. Haley described his book as faction - a mixture of fact and fiction.

Haley's novel begins with Kunta's birth in the village of Juffure in The Gambia, West Africa in 1750. Kunta is the first of four sons of the Mandinka tribesman Omoro and his wife Binta Kebba. Haley describes Kunta's strict Muslim upbringing, the rigors of the manhood training he undergoes, and the proud origins of the Kinte name.

One day in 1767, when young Kunta Kinte leaves his village to search for wood to make a drum, four men surround him and take him captive. Kunta awakens to find himself blindfolded, gagged, bound and prisoner of the white men. Haley describes how they humiliate him by stripping him naked, probing him in every orifice, and branding him with a hot iron. He and others are put on a slave ship for the three-month voyage from Africa.

Kunta survives the trip to Maryland and is sold to a Virginia plantation owner, Master Waller-, who renames him "Toby". He rejects the name imposed by his owners, and refuses to speak to others.

After being apprehended during the last of his four escape attempts, the slave catchers give him a choice: he can be castrated or have his right foot cut off. He chooses to have his foot cut off, and the slave catchers cut off the front half of his right foot. As the years pass, Kunta resigns himself to his fate, and also becomes more open and sociable with his fellow slaves, while never forgetting who he was or where he came from.

Following the success of the original novel and the miniseries, Haley was sued by author Harold Courlander, who asserted that Roots was plagiarized from his own novel "The African", published nine years prior to Roots in 1967. The resulting trial ended with an out-of-court settlement and Haley's admission that some passages within "Roots" had been copied from Courlander's work. Separately, researchers refuted Haley's claims that, as the basis for "Roots", he had successfully traced his own ancestry back through slavery to a specific individual and village in Africa.

It is because of such questions that I'm considering Kunta Kinte as fictionalized rather than as an historical character.

From the source:
Chapter One

Early in the spring of 1750, in the village of Juffure, four days upriver from the coast of The Gambia, West Africa, a man-child was born to Omoro and Binta Kinte. Forcing forth from Binta's strong young body, he was as black as she was, flecked and slippery with Binta's blood, and he was bawling. The two wrinkled midwives, old Nyo Boto and the baby's Grandmother Yaisa, saw that it was a boy and laughed with joy. According to the forefathers, a boy firstborn presaged the special blessings of Allah not only upon the parents but also upon the parents' families; and there was the prideful knowledge that the name of Kinte would thus be both distinguished and perpetuated.

It was the hour before the first crowing of the cocks, and along with Nyo Boto and Grandma Yaisa's chatterings, the first sound the child heard was the muted, rhythmic bomp-a-bomp-a-bomp of wooden pestles as the other women of the village pounded couscous grain in their mortars, preparing the traditional breakfast of porridge that was cooked in earthen pots over a fire built among three rocks.

The thin blue smoke went curling up pungent and pleasant, over the small dusty village of round mud huts as the nasal wailing of Kajali Demba, the village alimamo, began, calling men to the first of the five daily prayers that had been offered up to Allah for as long as anyone living could remember Hastening from their beds of bamboo cane and cured hides into their rough cotton tunics, the men of the village filed briskly to the praying place, where the alimamo led the worship: "Allahu Akbar! Ashadu an lailahailala!" (God is great! I bear witness that there is only one God!) It was after this, as the men were returning toward their home compounds for breakfast, that Omoro rushed among them, beaming and excited, to tell them of his firstborn son. Congratulating him, all of the men echoed the omens of good fortune.

Each man, back in his own hut, accepted a calabash of porridge from his wife. Returning to their kitchens in the rear of the compound, the wives fed next their children, and finally themselves. When they had finished eating, the men took up their short, bent-handled hoes, whose wooden blades had been sheathed with metal by the village blacksmith, and set off for their day's work of preparing the land for farming of the groundnuts and the couscous and cotton that were the primary men's crops, as rice was that of the women, in this hot, lush savanna country of The Gambia.

By ancient custom, for the next seven days, there was but a single task with which Omoro would seriously occupy himself: the selection of a name for his firstborn son. It would have to be a name rich with history and with promise, for the people of his tribe--the Mandinkas--believed that a child would develop seven of the characteristics of whomever or whatever he was named for.

On behalf of himself and Binta, during this week of thinking, Omoro visited every household in Juffure, and invited each family to the naming ceremony of the newborn child, traditionally on the eighth day of his life. On that day, like his father and his father's father, this new son would become a member of the tribe.