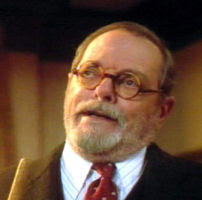 AS SEEN IN:
'Star Trek: The Next Generation' - "Phantasms"

AS PLAYED BY:
Bernard Kates

The holographic image of Dr. Freud does not necessarily mean this is how he looked in the "real life" of Toobworld. It's more the projected image of him as conceived by the holographic programmer who installed the program. In the year 2370, Lt. Commander Data would visit the holographic projection in order to work out the dreams he was having about the Enterprise being attacked. Data stopped consulting with him when Dr. Freud diagnosed him as a "polymorphous perverse" with a desire to possess his own mother. Data realized that this treatment was of no help since, as an android, he had no mother. 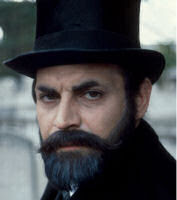 AS PLAYED BY:
David Suchet

Although I haven't given it much thought yet, the six episodes of this 1984 mini-series could be the definitive portrayal of Freud in the main Toobworld. Suchet carries the life of the psycho-analyst from a young man to his death.

Because Kates' portrayal was a hologram, there is no discrepancy in allowing both portrayals to remain in Earth Prime-Time.