AS SEEN ON TV: GEORGE WASHINGTON

In his television career, Peter Graves played the televersions of three historical figures:

The official TV portrait of Daniel Boone is that by Fess Parker in the TV series, so those two episodes of 'The Great Adventure' can be placed into an alternate TV dimension. As far as I can tell, Mr. Graves was the only person to ever portray O. Henry on TV, so he could lay claim to be the official televersion of the short story writer. 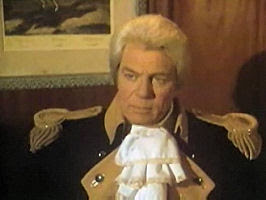 AS SEEN IN:
"The Rebels"

AS PLAYED BY:
Peter Graves

I'm leaning toward Barry Bostwick as being the official representative of George Washington in Earth Prime-Time. But we can cobble together a theory in which the General had a series of stand-ins for security, to maintain the illusion that he was in various places at the same time (a gimmick used by Winston Churchill in "The Eagle Has Landed").

George Washington as played by Peter Graves would be one of those men - unless he was a quantum leaper......

It's an absurd idea from our perspective (although I'll bet there's an author out there who could make it work), but since when has Toobworld been concerned with reality? In an alternate universe in which cars can talk and billowing smoke can be a major character, the idea of a George Washington impersonator is rather tame.....

Labels: Alternateevee, As Seen On TV, By Any Other Name, Game of the Name, Recastaways, Splainin 2 Do, Tele-Folks Directory, TV Movies, Wish-Craft