Ah, the innocence of a by-gone era in Television.....
"I was up all night,
Polishing my sword."
Captain Lee Crane
'Voyage To The Bottom Of The Sea'
That was from the episode "Doomsday" which is airing right now on the American Life Network. Apparently the United States mistakes a satellite launch for a missile attack, which brings the world of 1973 to the brink of Armegeddon.

For the last few days during my countdown of the 2008 Toobits Awards, I've been mentioning the major contribution of 'Primeval' to Toobworld - that of a major shift in the timeline so that certain events - and characters - have been altered. Nick Cutter goes back in time through one of the anomalies and when he returns, Claudia Brown no longer exists, but a woman who looks just like her but named Jenny Lewis is now alive. When he returns, there's also a brand new Anomaly Research Centre (ARC), and they are years ahead of their research into the prehistoric past.

One of the shows I used as an example of the benefits from this timeline tweak was 'Voyage To The Bottom Of The Sea', and the "Doomsday" episode provide the evidence: 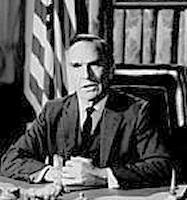 It takes place in 1973; the date is right up there on King Neptune's banner as the sub is crossing the Equator. But the President of the United States was not Richard M. Nixon, but Henry Talbot McNeil (not that it matters, but as played by Ford Rainey). And that's how it stood until Cutter changed the timeline back during the prehistoric period. Upon his return, McNeil never was President of the United States, but instead Nixon was the POTUS of 1973.

Although the events of "Doomsday" still play out in the new timeline, it's now Nixon who brings the world to the brink of annihilation. However, the viewing audience in the "Trueniverse" will always just see the original version of that timeline. (Must be something wrong with the vortex transmission, he said, while whistling innocently and rolling his eyes.)

I realize I've mentioned this several times in the past, but there are always new visitors to "Inner Toob", first learning of the Toobworld Concept. So it's always new to somebody.......