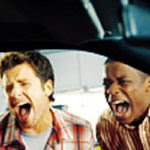 Sean and Gus, the private eyes of the 'Psych' detective agency, will be featured in a new commercial which will run during the show from January 9 to February 20. It's for the Kia Optima and will be an actual "mini-sode" for 'Psych'.

"Characters Shawn and Gus (played by James Roday and Dule Hill) are being chased by a gunman, as they become mesmerized by Optima's beauty and accidentally give up their location to him. The gunman, in turn, sets off an alarm when he tries to steal the car, allowing the good guys to make a run for it. The spot ends with Shawn fantasizing about driving off in the car, Gus shaking him back to reality and a tune-in message for the TV series."
Add in their blipvert adventures in the Tooniverse, and it ooks like the Psych boys are on the fast track to membership in the TV Crossover Hall of Fame.