As the month draws to a close, it's time to induct the November member of the TV Crossover Hall of Fame......


Because it's the month in which the nation holds its elections, November is traditionally when the inductee is a newsmaker, a newscaster, or a politician - either fictional televersion or League of Themselves.

And for 2012, we've reached into the Past to celebrate Ben Franklin! 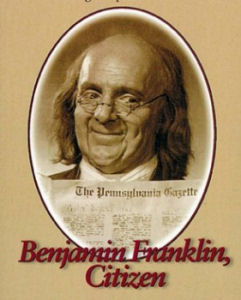 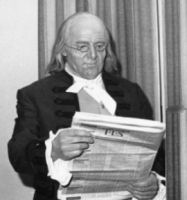 From Wikipedia:
Benjamin Franklin (January 17, 1706 [O.S. January 6, 1705]– April 17, 1790) was one of the Founding Fathers of the United States. A noted polymath, Franklin was a leading author, printer, political theorist, politician, postmaster, scientist, musician, inventor, satirist, civic activist, statesman, and diplomat. As a scientist, he was a major figure in the American Enlightenment and the history of physics for his discoveries and theories regarding electricity. He invented the lightning rod, bifocals, the Franklin stove, a carriage odometer, and the glass 'armonica'. He facilitated many civic organizations, including a fire department and a university. 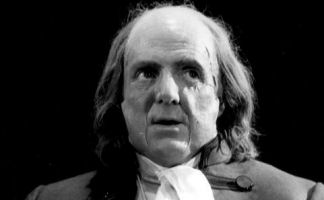 Franklin earned the title of "The First American" for his early and indefatigable campaigning for colonial unity; as an author and spokesman in London for several colonies, then as the first United States Ambassador to France, he exemplified the emerging American nation. Franklin was foundational in defining the American ethos as a marriage of the practical values of thrift, hard work, education, community spirit, self-governing institutions, and opposition to authoritarianism both political and religious, with the scientific and tolerant values of the Enlightenment. 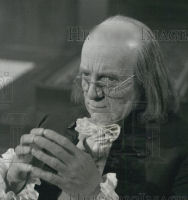 In the words of historian Henry Steele Commager, "In a Franklin could be merged the virtues of Puritanism without its defects, the illumination of the Enlightenment without its heat." To Walter Isaacson, this makes Franklin "the most accomplished American of his age and the most influential in inventing the type of society America would become." 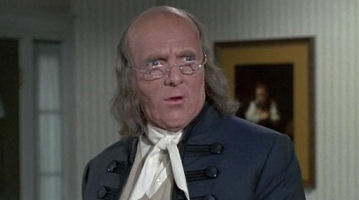 Franklin has been portrayed many times over the years on TV, and each of them adds to Ben's qualifications for membership. But some of them are from alternate Toobworlds, or based on the memories of some other character (as is the case with Philip Kent in 'The Bastard'). Or in the case of 'Jack Of All Trades', his presence is an outright fabrication from a book written by a syphilitic old patriot.  (There was no way in which Franklin could have shown up on the Pacific island of Palau Palau in 1801 - he had been dead for 11 years!) 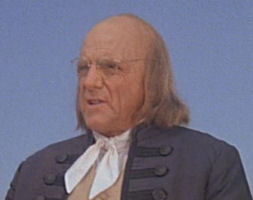 But there is one portrayal of Ben Franklin who serves as the official televersion. He can be found in an historical drama, a fantasy sitcom, a sci-fi time travel show, and even in a mystery series. He's Benjamin Franklin... as portrayed by Fredd Wayne.

Just consider this line-up of his TV credits as Franklin: 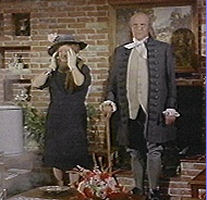 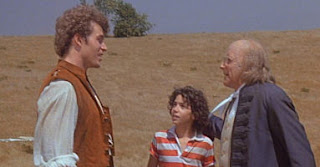 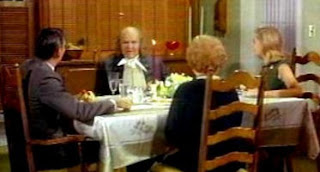 It's the perfect Toobworld line-up of links - you have a docudrama to set the base, a Hall of Fame worthy encounter with another official portrayal (Mr. Boone), and then interactions with fictional tele-folks in their own series.

A few notes:
So we're tipping our tri-corner hat to Ben Franklin and his official portrayer, Fredd Wayne! 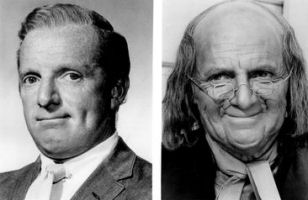 Welcome to the Hall of Fame! 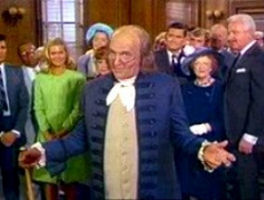 I'm glad his Jack of All Trades version at least gets a nod, man, what a show that was......