This is only how I feel, but I believe that no matter how well-written a tale of fantasy and how well-realized its world, it could fall apart if the author has a bad facility for the coining of names. (This is a topic I've been passionate about since reading Lin Carter's take on the subject.)

The world of Earth Prime-Time is a fantasy realm in teh sam way that Lankhmar and Middle-Earth are. (My two favorites!) And it is home to a world of fantastical people - witches, genies, Martians, time travelers, ghosts, warriors, princesses, talking horses, and Jerry Mathers as the Beaver.

So as a fantasy realm, Earth Prime-Time should have names to match.

Unfortunately, a lot of character names are drab, mundane names - but then most of the people of Toobworld are ordinary folk.

But there are those that are graced with a touch of brilliance - Napoleon Solo, Illya Kuryakin, Miguelito Quixote Loveless, Horatio Caine, Artemus Gordon, James Tiberius Kirk and Woodrow Tiberius Boyd.

My all-time favorite coined name from television has long been Pinky Likewise from an episode of 'Burke's Law'. And although it doesn't come close to disturbing Ms. Likewise's chosen spot, I've found a new name in classic TV that swings for the fences when it comes to its fantasy pedigree: 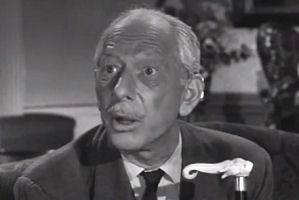 (He was an old man in San Francisco whose nephew plotted to kill him.)

Doesn't "Pontifex Tundifer" sound like the name of a wizard? (Coincidentally, the actor who played Pontifex - Vaughn Taylor - played a wizard, a "witch-man" of the Orson Scott Card "Seventh Son" variety, in an episode of 'The Twilight Zone'.)

That episode of 'Thriller' had a lot of other distinctive names - Miles Tundifer, Queenie De Lyte, Mr. Passasstory - but it would be hard to top Pontifex Tundifer!