AS SEEN ON TV: TEAGUE THE WITCH-MAN 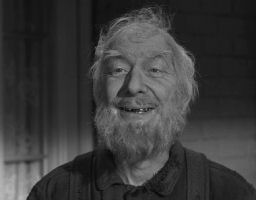 AS SEEN IN:
'The Twilight Zone'
"Still Valley"

From Wikipedia:
"Still Valley" is an episode of the American television anthology series 'The Twilight Zone'.

Set during the American Civil War, the episode opens with two Confederate soldiers. They have been assigned to scout on the Union army that is marching into the valley below. Sergeant Joseph Paradine hears the army approaching, but suddenly the sound stops. He decides to descend into the valley to see the cause for himself. His companion refuses to come.

When Paradine gets into town, he finds the army there, but all of them are motionless, as if frozen in time. He tries unsuccessfully to wake them. Finally he comes across an old man named Teague, who is unaffected by the strange phenomenon. Teague claims to be a "witchman" and says he used a magic spell to freeze the soldiers. Paradine does not believe him, so Teague casts the spell on Paradine, freezing him.

When Teague lifts the spell on Paradine, he brags that he could stop the entire army in this manner, ensuring the success of the Confederacy. Paradine asks why he doesn't, and Teague replies that he is dying. He gives his book of spells (entitled Witchcraft) to Paradine, encouraging him to use it, but when Paradine looks in it, he realizes that using this magic requires one to align himself with Satan.

Teague dies, and Paradine returns to camp to tell his superior about what happened. The superior doesn't believe him and encourages him to get some rest. When another scout returns with the same story, the superior realizes Paradine is telling the truth. Paradine relates the story about the old man, the spell book, and making a deal with the devil. The superior officer decides that the devil is the only one who can help them and encourages Paradine to read from the book.

In the original story the spell is broken when the book is burned.

This is a great example for the argument that Earth Prime-Time is a fantasy realm.  Wellman may have been the leading scribe in Americana fantasy....