AS SEEN ON TV: CAVOR & BEDFORD 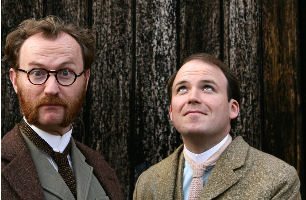 AS SEEN IN:
"The First Men In The Moon" 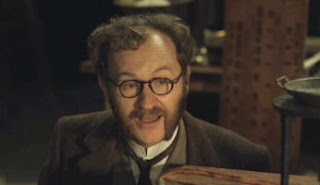 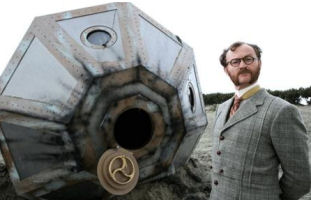 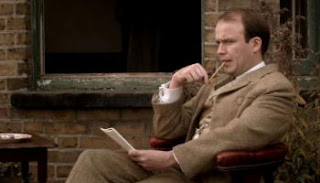 From Wikipedia:
"The First Men in the Moon" is a scientific romance published in 1901 by the English author H. G. Wells, who called it one of his "fantastic stories." The novel tells the story of a journey to the moon undertaken by the two protagonists, a businessman narrator, Mr. Bedford, and an eccentric scientist, Mr. Cavor. Bedford and Cavor discover that the moon is inhabited by a sophisticated extraterrestrial civilization of insect-like creatures they call "Selenites." 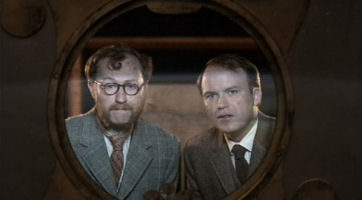 The narrator is a London businessman who withdraws to the countryside to write a play, by which he hopes to alleviate his financial problems. Bedford rents a small countryside house in Lympne, in Kent, where he wants to work in peace. He is bothered every afternoon, however, at precisely the same time, by a passer-by making odd noises. After two weeks Bedford accosts the man, who proves to be a reclusive physicist named Mr. Cavor. Bedford befriends Cavor when he learns he is developing a new material, cavorite, that can negate the force of gravity.

When a sheet of cavorite is prematurely produced, it makes the air above it weightless and shoots off into space. Bedford sees in the commercial production of cavorite a possible source of "wealth enough to work any sort of social revolution we fancied; we might own and order the whole world." Cavor hits upon the idea of a spherical spaceship made of "steel, lined with glass," and with sliding "windows or blinds" made of cavorite by which it can be steered, and persuades a reluctant Bedford to undertake a voyage to the moon; Cavor is certain there is no life there.

This is the third collaboration between Thomas and Gatiss (after "The Worst Journey In The World" and "Crooked House"), and the first film to be produced by their production company Can Do Productions. On adapting the novel Gatiss said "I'm completely delighted to have the chance to bring this wonderful, funny, charming and scary story to BBC Four. It's very rare to be able to adapt a genius like HG Wells for the small screen and we hope to do full justice to his extraordinary vision." 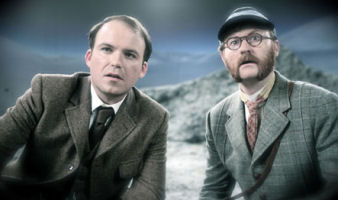 "The First Men on the Moon" was first broadcast on 19 October 2010 on BBC Four.
The film's setting begins in July 1969 as 90-year-old Julius Bedford (Rory Kinnear) tells young Jim (Alex Riddell) the story of how two men made the first journey to the Moon back in 1909. He relates that when he was a young man, he met Professor Cavor (Mark Gatiss) at Apuldram and learned that Cavor had invented 'Cavorite', a substance that blocked the force of gravity. He tells how he encouraged Cavor to think toward the profits his invention might bring, and how the two worked together to build a cast iron sphere that would fly them to the moon. 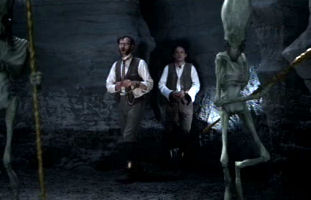 As the Moon has a breathable atmosphere no spacesuits are used. Upon being captured by the Moon's inhabitants (whom Cavor names Selenites) who throw nets over them and knock them out with sticks, both Cavor and Bedford find themselves in a perilous state after Bedford kills some Selenites with his greater strength when they try to force him over a narrow bridge. In an attempt to escape back to Earth, Cavor decides to remain behind to give Bedford time to reach the spacecraft. Bedford almost crashes the spacecraft into the Sun, but escapes and lands close to home at West Wittering.

However, his hopes of returning to the Moon to rescue Cavor are dashed when the passer-by Chessocks (Lee Ingleby) accidentally takes off in the craft—Bedford does not know how to produce Cavorite and so cannot produce another craft. Cavor remains in captivity and teaches the Selenites the English language as well as some of mankind's history and the recipe for Cavorite. The Selenites determine that mankind is a threat to the Moon and decide to use Cavorite to make a pre-emptive strike. Communicating his intentions beforehand to Bedford by wireless, in an act of desperation Cavor releases the Cavorite the Selenites are producing and thus evacuates all air from the Moon's surface. This renders it a truly barren world ready to be rediscovered by the Apollo program, though the final shot reveals a Selenite observing the Apollo 11 landing.

The film ends with a tribute to Lionel Jeffries, who played Cavor in the 1964 film and who died in 2010.

O'BSERVATIONS:
Some alterations to the BookWorld version - Bedford is given a first name. Wold Newton scholars have accepted "Selwyn" as the first name for Cavor, but I believe that to be an invention on the part of Alan Moore in his "League Of Extraordinary Gentlemen" comic book series.

And it was originally a boy named Tommy Simmons who took off in the sphere, not the man Chessocks. (It was probably decided such a grim fate for a boy might be too much for the audience?)

I wonder if anyone has ever attempted to tell the story of what happened to Tommy Simmons? A quick check at the Wold Newton website (Link to the left, Team Toobworld!) doesn't yield any results.......