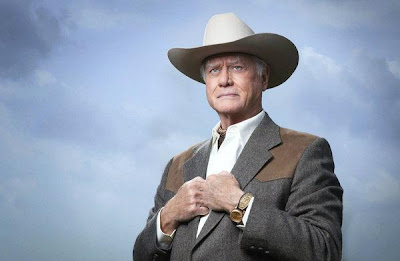 When I heard the news about Larry Hagman Friday night, I posted to Facebook that I was glad J.R. Ewing was inducted into the TV Crossover Hall of Fame back in August. Better to do that while Hagman was alive - I think it means more than a memorial tribute.

This past summer, Hagman's character from "The Rheinmann Exchange" was featured in the "As Seen On TV" showcase. And that BookWorld transfer, Colonel Ed Pace, has made it through the selection process to be included in my "Tele-Folks Directory" - 108 TV characters who have special meaning for the Toobworld Dynamic. (For his theory of "relateeveety", Ed Pace was the biological father to J.R. Ewing, Judge Luther Charbonnet, and Major Anthony Nelson.)

When people speak of Mr. Hagman as being an iconic figure in Television, I think it will be in regards to J.R. Ewing; Tony "Master" Nelson of 'I Dream Of Jeannie' will be an after-thought. He did amazing comic work on that show, very facile with the double-takes (and there were plenty of opportunities for those in every episode). But he had two other comic masters to work with as well as the loverly blonde in the diaphanously veiled "pants suit". Against those odds, he was still able to shine.

However, when 'I Dream Of Jeannie' returned for two TV movies, the role was recast - first with Wayne Rogers and then by Ken Kercheval - which diluted the memory of Hagman's work in the part. And let's face it - Barbara Eden with her hidden belly button was the only true icon from that show.

After that sitcom ended, Hagman created a new persona for the many characters he played in a host of other TV shows - that of a weasel. Sometimes his weaselly characters were the bad guys, other times it was just a personality trait of survival. But it was a solid career of supporting guest star roles and fluffy TV movies of the week and it all would have been enough for him to be fondly remembered upon his passing.

(I'd also like to mention a few memorable roles Larry Hagman had in the Cineverse - in "The Eagle Has Landed", "Superman", and "Harry & Tonto". Those were all post-IDOJ, but the crowning achievement in the movies happened before he became Major Nelson, when he played the President's translator in "Fail Safe". It must have been a heady experience to know that for long sequences in that movie he would be the only one sharing the screen with Henry Fonda!)

I've heard it said that the secret in successfully portraying a villain is to never consider the character to be evil. From their perspective, they are doing the right thing. But I think J.R. Ewing is that rare exception - he not only knew he was a bad, bad boy, but he actually reveled in it! Audiences responded to that delight J.R. took in his actions, which is why he became a Colossus who changed the TV landscape from that point in May of 1980 onwards.

I've often joked that the title of my autobiography would be "Living On The Periphery" - all about my place on the far distant outer rim in the great socio-political and cultural events of history. And one example would be about me and the phenomena that surrounded the 'Dallas' cliff-hanger "Who Shot J.R.?".

Marvin Kitman, the TV critic for Long Island's paper "Newsday" asked his readers for their suggestions as to who shot J.R. Ewing. I wrote in and pointed the finger at my Grammy O'Brien, saying that she was down in Texas at the time visiting her daughter and her grand-daughters, so she had the opportunity. Kitman took the time to write back and said that he loved the idea of me pinning the blame on me own grandmother. J.R. would have been so proud!

Appropriately enough for a modern-day cowboy, Larry Hagman as J.R. Ewing basically died with his boots on - he had completed six of the fifteen episodes for a second season of the 'Dallas' revival. And however the producers decide to deal with this "Giant" loss, one thing is clear - even if they kill off the character within the show (and thus within the Toobworld Dynamic), the memory of J.R. Ewing will live forever.

Labels: As Seen On TV, Big Screen TV, Hat Squad, League of Themselves, Life During Prime-Time, My So-Called Life, O'Bservations, Recastaways, Tele-Folks Directory, Theories of Relateeveety, Twipped from the Headlines