AS SEEN ON TV: LORD OF THE PRIME-TIME JUNGLE

With the greatest character created by Edgar Rice Burroughs celebrating his centennial, this seemed like the perfect time to showcase Tarzan's best-known televersion...... 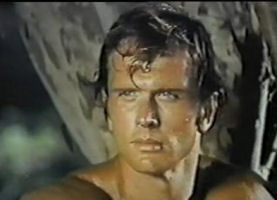 AS SEEN IN:
'Tarzan'

From Wikipedia:
'Tarzan' is a series that aired on NBC from 1966 – 1968. The series portrayed Tarzan (played by Ron Ely) as a well-educated character, one who, tired of civilization, had returned to the jungle where he had been raised. The show retained many of the trappings of the classic movie series, including Cheeta, while excluding other elements, such as Jane, as part of the "new look" for the fabled apeman that producer Sy Weintraub had introduced in previous motion pictures starring Gordon Scott, Jock Mahoney, and Mike Henry. CBS aired repeat episodes the program during the summer of 1969.

Mike Henry had just filmed several big-screen adventures as Tarzan in Brazil and was slated to play the lead in the TV series, but backed out due to disagreements with producer Sy Weintraub. Ron Ely was originally to have played a Tarzan impostor in a proposed episode of the TV series, but took over the lead role.

Like Jock Mahoney, Ely insisted on performing his own stunts when playing Tarzan. Unlike Mahoney, Ely was not a professional stuntman and sustained seventeen different injuries during the first season. These included singeing his arms and legs running through a burning village ("Village of Fire"); being bitten in the forehead by a "tame" lion (in a later fight with the same lion, Ely was bitten on the lower left thigh); falling down a hill and ripping the skin off the tops of his feet; falling twenty-five feet off a vine and separating his shoulder; and falling off another vine and breaking his other shoulder, fracturing three ribs and spraining both wrists.

PREVIOUSLY ON "AS SEEN ON TV"

O'BSERVATIONS:
With each of the televersions of Tarzan, the story has been modernized to the time of broadcast; we have yet to see the Tarzan of the Edwardian Age as envisioned by ERB. Should that happen (and this being the 100th anniversary of the character would have been the perfect time for that), that Tarzan would be welcomed into the Toobworld Dynamic as the Tarzan of Earth Prime-Time.

That is, he would be the first Tarzan of Earth Prime-Time. Ron Ely's portrayal would not be displaced. Rather, he would be considered the grandson of the original Tarzan and - although the character has been unmentioned (so far) in Toobworld - he would be the son of Korak and Meriam. (Just my own tip of the hat to my counterparts like Win Scott Eckert who do such amazing work on the Wold Newton Universe envisioned by Philip Jose Farmer.)