SPOTLIGHT ON: THE CLEARY THEORY 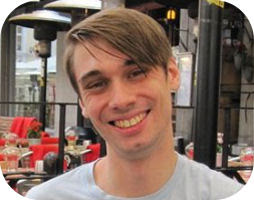 Michael Cleary is one of the uncles to my god-daughter Rhiannon, and one of my best friends as well. He offered to write up a post for Inner Toob that would connect three classic Britcoms to the greatest science fiction series of all time. And I, lazy bastid that I am, greedily accepted.

First off, I write this as an homage to Toby O'B's wonderful "Toobworld", and also to the man himself. He actually has made me "perk up" and watch credits and really think about the smaller roles people play, and how they are NOT unimportant! As they say, we have no small roles, only small actors. So thank you, Toby!
Ok, here I go!
'Are You Being Served?' was a British sitcom broadcast from 1972-1985. It was set in the fictional Grace Brother department store. The idea for the series came from Jeremy Lloyd working at Simpson's of Piccadilly, a clothing store which operated for 60 years until 1999.  Two other stores that inspired the series were Rossiters of Paignton and Clements of Watford.
I'm going to run with the idea that Grace Brothers was set in almost the place as Simpson's of Piccadilly, due to the fact that throughout the series, many characters dealt with transit strikes and bus trips, and also going out to major attractions in central London, while lamenting about the long trips home, or also, how close they are to the store. (Piccadily is a major center area of London).
Along the run of the original series, I was amazed that we might have connections to two other BBC series, via characters on both of them who might also be on 'Are Your Being Served?' The important thing I learned is that all these people showed up at one time or another on the series (mostly within 3-4 years) and were never named, which I will assume means they were the same characters from the other shows.
First up is 'Fawlty Towers'. 'Fawlty Towers' is set in Torquay, which is in the south east of England, putting it around 3 hours from London, depending how you travel. It is the 45th largest city in the country and during the peak summer season they recieve over 200,000 tourists. Torquay was also the home of Agatha Christie who lived most of her life there. But most importantly, it also contained Basil Fawlty.
Basil's hotel also served as a sort of a "old peoples home" for wealthy people. This included Major Gowen, whom my friend Toby already did a piece on, and I absolutely agree with it. Why wouldn't any of the guests staying in the hotel get away to London once in a while?
Which brings me to another famous guest from the episode "The Kipper and the Corpse" named Mrs. Chase.


She shows up with a little dog that tends to bite people, yet she pampers it, no matter what it does. Major Gowen shows some interest in it, but then loses his mind again worrying about dead bodies and Germans. Mrs. Chase was played by the late, great Mavis Pugh and here is a shot with herself, the Major, and the dog: 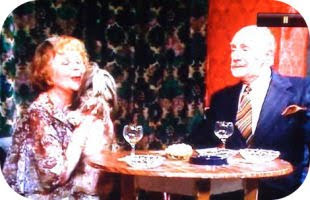 Now, at the same time the Major went to Grace Brothers, we have to assume so did Mrs. Chase, since she showed up the same season. She visited Grace Brothers with a dog to buy him some clothes. (Yes it is a different breed, but it would seem that since she loves them so much, she must have more than one.*) 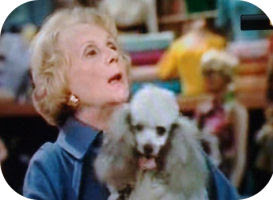 At around the same time I come to another BBC show, 'Absolutely Fabulous', which has the ex-model, current Fashion Executive (depending on who you ask in the series) and major drug addict and drunk, Patsy Stone, played by Joanna Lumley. Based on the facts of her past history in the series, she seemed to have worked early on at Grace Brothers*, as well as a His and Hers perfume model... as seen in these pictures: 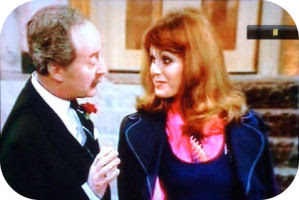 "You've certainly caused a stir in the trouser department."
Captain Peacock
She seems to have angered the staff and also showed a touch of early Patsy Stone with John Inman: 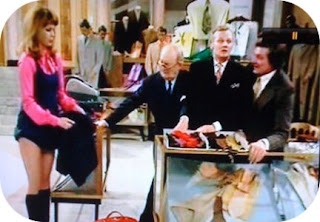 In the series of 'Ab-Fab', her mother (who never wanted her) was played by the great Eleanor Bron. Patsy's mother lived in Paris as a hippie and art lover, yet hated her daughter as seen in this flashback scene in 'Ab-Fab': 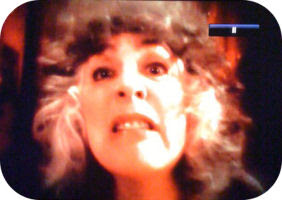 This leads me to wonder about the scene in 'Doctor Who': "City of Death" (Episode 4). Did Basil Fawlty show up in Paris, because he got away from his wife for just a day to visit a museum? (Sybil always went away for a day, or even an overnight, with her best friend.  Why not Basil?) And at the same time did he run into Patsy's art-loving mother? 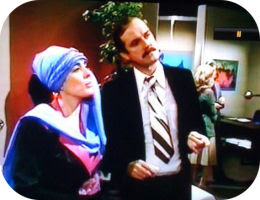 Maybe two of the most horrid people in the comedy world got to share a great moment together*...... You decide!
Yes, I know; I have a big mouth.......

As you may have noticed, there are a couple of asterisks to be found throughout MIchael's piece. I have some notes of my own about what he had to say at those points, but I didn't want to detract from the excellent research into this four-way Missing Link. I agree with everything he's claiming here, but there are some details that need to be covered. So I'll have those up in a separate post later today......

I'm hoping that somewhere out there amongst Team Toobworld, or anybody else who happens upon this post, someone will feel inspired to send along their own version of Toobworld televisiology which I can showcase here at Inner Toob. (Sean, you still owe me that 'Enterprise' piece!) Give it some thought and write it up. If you can't find the appropriate pictures, don't worry - I probably already have it in the Toobworld database.
Once again, a very big thanks to Michael Cleary for all the research. (And for doing all of the work! As I'm slowly getting used to this new format on Blogger, I could use a bit of a break in the writing department.....) 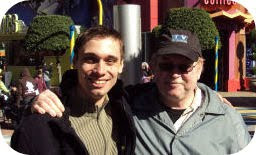 Good link via Who! Also, one of the best scenes in Who. The aloof appraisal of the TARDIS as 'found art' would certainly fit Basil...