AS SEEN ON TV: CHRISTOPHER ISHERWOOD 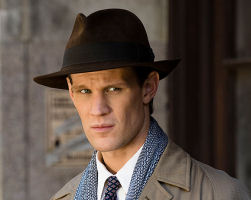 AS SEEN IN:
"Christopher And His Kind"


AS PLAYED BY:
Matt Smith
TV DIMENSION:
Earth Prime-Time
From Wikipedia:
Christopher William Bradshaw Isherwood (26 August 1904 – 4 January 1986) was an English-American novelist.
In 1925 he became [W.H. Auden]'s literary mentor and partner in an intermittent, casual liaison. Auden sent his poems to Isherwood for comment and approval. Through Auden, Isherwood met Stephen Spender, with whom he later spent much time in Germany. His first novel, "All the Conspirators", appeared in 1928. It was an anti-heroic story, written in a pastiche of many modernist novelists, about a young man who is defeated by his mother.


In 1928–29 Isherwood studied medicine at King's College London, but gave up his studies after six months to join Auden for a few weeks in Berlin. 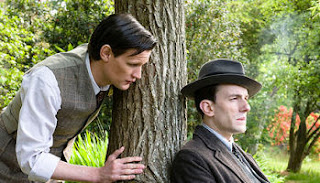 Isherwood with Auden
Rejecting his upper middle class background and attracted to males, he remained in Berlin, the capital of the young Weimar Republic, drawn by its reputation for sexual freedom. There, he "fully indulged his taste for pretty youths. He went to Berlin in search of boys and found one called Heinz, who became his first great love.
In 1931 he met Jean Ross, the inspiration for his fictional character, Sally Bowles. He also met Gerald Hamilton, the inspiration for the fictional Mr. Norris. In September 1931 the poet William Plomer introduced him to E. M. Forster. They became close and Forster served as his mentor.

During one of his return trips to London he worked with the director Berthold Viertel on the film "Little Friend", an experience that became the basis of his novel "Prater Violet" (1945). He worked as a private tutor in Berlin and elsewhere while writing the novel "Mr. Norris Changes Trains" (1935) and a short novel called "Goodbye to Berlin" (1939) (often published together in a collection called "The Berlin Stories"). These works provided the inspiration for the play "I Am a Camera" (1951), the 1955 film "I Am a Camera" (both starring Julie Harris), the Broadway musical "Cabaret" (1966) and the film (1972) of the same name. 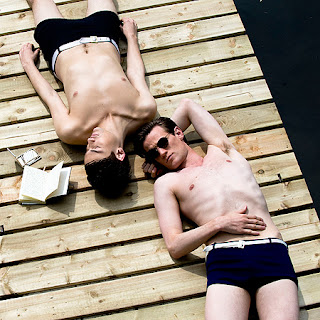