If you haven't read Michael Cleary's special guest appearance here at Inner Toob - "The Cleary Theory" - please scroll down and do so. Michael grasped one of the fundamentals for the Toobworld concept - that the small, unnamed guest roles in TV shows could be characters in other series - and he ran with it to connect 'Are You Being Served?' to 'Absolutely Fabulous', 'Fawlty Towers', and 'Doctor Who'.
In that article, I marked a few comments with asterisks so that I could elaborate on them later. None of these embellishments negate what Michael posted; I'm just adding a few details to their lives during prime-time.

She visited Grace Brothers with a dog to buy him some clothes. (Yes it is a different breed, but it would seem that since she loves them so much, she must have more than one.*) 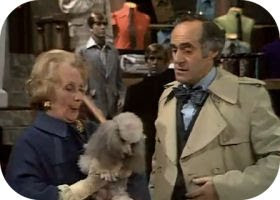 Mrs. Chase first showed up at the Grace Brothers department store one year before she was seen staying at Fawlty Towers. In most episode guides she is listed as "Roger's Mistress". In others, as "Customer".

What Michael didn't point out was that she went on that shopping trip not only with her dog Roger, but also her husband, who was only listed as "Roger's Master". 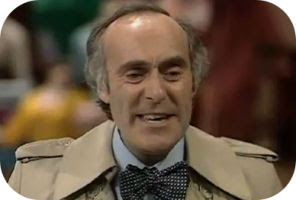 Raymond Bower played three other roles in 'Are You Being Served?' and it's likely that the "Sweater Customer" ("Mrs. Slocombe Expects") and "The Shrunken Sock" ("The Hero") could have also been the same character. But Mr. Crawford ("It Pays To Advertise") was either a different character or using an alias for some reason. (In any other circumstance, I would have just said Mr. Crawford was the other three customers as well - Grace Brothers likes repeat business! - but Michael's theory was too good to pass up. And not every character played by the same actor on the same series has to be the same person. Just look at Vito Scotti on 'Columbo' for proof of that!
Anyhoo......

At some point after that trip to Grace Brothers, Mrs. Chase lost both her husband and her poodle Roger. Either they both had died - perhaps together in a car crash on the way to the vet? - or the Chases got a divorce and Mr. Chase got custody of Roger.

So one way or t'other, Mrs. Chase must have consoled herself by getting a new dog and by forgetting her troubles with a trip to Torquay.

Based on the facts of her past history in the series, she seemed to have worked early on at Grace Brothers*, as well as a His and Hers perfume model... as seen in these pictures: 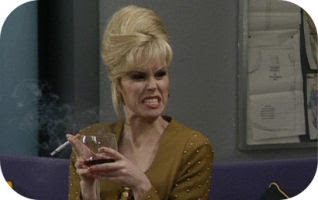 Joanna Lumley guest-starred on 'Are You Being Served?' long before she became the physical wreck Patsy Stone on 'Absolutely Fabulous'. But according to most episode guides, when she was working at Grace Brothers she was known as "Miss French".
However, at no point during the episode "His and Hers" is her name actually given; and she is never addressed as "Miss French". The name doesn't even appear in the end credits - not that I've ever given any weight to the end credits in the past. 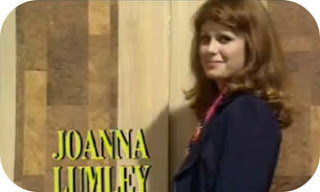 If we need to hold to the notion that she was appearing as Miss French, it could be that Patsy Stone used that name as her nom de mode when she was a model (which she demonstrated during the episode). Or maybe she was meant to be addressed as "Mz. French" - perhaps she had been briefly married at some point. (We know that "Stone" was her birth name and not a married name because her sister was Jackie Stone - as played by the devilish Kate O'Mara.)

But in the end, I think Toobworld Central is going to side with what actually was on air - and that was her name was never mentioned at all. So as far we're concerned, she was Patsy Stone.
And finally.....

Maybe two of the most horrid people in the comedy world got to share a great moment together*.

Here's the scene in which John Cleese and Eleanor Bron made cameos on 'Doctor Who' as snobby, pretentious art patrons in a Parisian art gallery:

I think MIchael is right - the actors were actually appearing in 'Doctor Who' as Basil Fawlty and Patsy's Mother. (She never was given a name on 'AbFab'.)

They probably only just met in the museum that day, but the experience of seeing the TARDIS vanish gave them a bond shared by very few in the World of the Toob. And because Basil could easily succumb to the base nature of his human frailties, and because Patsy's Mother was prone to be - well, let's face it, a slut - then I think it's pozz'ble, just pozz'ble, that the two of them ended up in a Parisian hotel room together that day.

Paris... "The City Of Little Deaths" if you know what I mean. Nudge nudge wink wink.

Labels: By Any Other Name, Double Vision, Game of the Name, Life During Prime-Time, My So-Called Life, Online TV, Special Guest Appearance, Tele-Folks Directory, Who's On TV, World Toob