TWIPPED FROM THE HEADLINES - KITT'S COMEBACK? 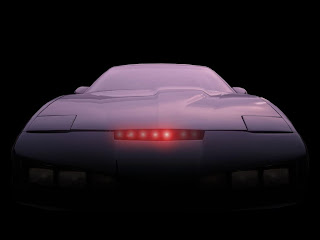 The L.A. Times is reporting that The Weinstein Company has plans to bring 'Knight Rider' into the Cineverse with a feature film with a draft screenplay by Brad Copeland.

It's doubtful that David Hasselhoff would be playing Michael Knight.  But it might be possible that he'll be given a cameo in the production, something that's always good for publicity value.  (Ray Walston in the movie version of "My Favorite Martian", Ernest Borgnine in Tom Arnold's update to 'McHale's Navy', and the original 'Starsky & Hutch' in a reboot of their series are good examples.)

As for the voice of KITT?  They already revamped the remake TV series with the voice of Val Kilmer instead of William Daniels, and I don't think they'd even consider continuing with him, let alone "Mr. Feeney".

My suggestion for a new voice for KITT?

Yes, I know I'm O'Bsessed with 'Doctor Who', but I think the voice-over work for KITT needs somebody who has a distinctive, recognizable voice, one that could go either way in the snark department.  In my mind (what's left of it), I've always thought Roddy McDowall was always a perfect choice for such voice-over work.  And there's something about Tennant that always reminded me of McDowall.  (In fact, I've always wanted him to play the Bookworm in a revamp of 'Batman'.)

And speaking of publicity ploys, what could be better for a non-screen appearance than one of the actors associated with 'Doctor Who'?