LEAGUE OF THEMSELVES - LEBRON JAMES 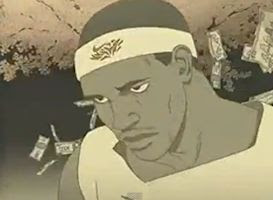 From Wikipedia:
LeBron Raymone James (born December 30, 1984), nicknamed "King James", is an American professional basketball player for the Miami Heat of the National Basketball Association(NBA). Standing at 6 ft 8 in (2.03 m) and weighing in at 250 lbs (113 kg), he has played the small forward and power forward positions for Miami, as well as the Cleveland Cavaliers. James has been a two-time NBA champion, a four-time NBA Most Valuable Player, a two-time NBA Finals MVP, a two-time Olympic gold medalist, an NBA scoring champion, and the NBA Rookie of the Year. He has also been selected to nine NBA All-Star teams, nine All-NBA teams, and five All-Defensive teams, and is the Cavaliers' all-time leading scorer.

James won his first championship in 2012 when Miami defeated the Oklahoma City Thunder, earning the NBA Finals MVP Award for his play. In 2013, the Heat won their second consecutive title and he repeated as Finals MVP. His career achievements and leadership role during the Heat's 2012 and 2013 championship runs have led many basketball analysts, experts, and writers to consider him the best player in the NBA today.

Off the court, James has accumulated considerable wealth and fame as a result of numerous endorsement contracts. His public life has been the subject of much scrutiny, and he has been ranked as one of America's most disliked and influential athletes. He has also been featured in books, documentaries, and television commercials, and has hosted the ESPY Awards and 'Saturday Night Live'.

AS SEEN IN:
Nike commercial
"Chamber Of Fear"

O'BSERVATIONS:
I'm not a basketball fan at all, so I didn't feel any desire to mark the occasion of the NBA finals with any kind of Toob-related post.  However, the recent death of martial arts actor Jim Kelly, best known for being Super-Bad in "Enter The Dragon", gave me a reason to reconsider.  (He appears in this blipvert.)

(And with that, I guess we can say we paid the bills for this week!)