Everybody in the Trueniverse has a doppelganger in the TV Universe, living on Earth Prime-Time.  Sometimes they even have more than one, living in the alternate dimensions like Skitlandia or the Tooniverse.

Best known of course are the celebrities who play themselves in various TV shows, and I've been featuring them all year in the daily showcase "The League Of Themselves."

But ordinary folk like you and me would also be in this Brave View World.  Most of us would lead the same lives we do in the real world, with some adjustments.


This week, our feature shines the spotlight on another one of my Facebook friends, whose life during prime-time is currently being showcased on network television.

Jennifer Tricia Bagoly Bunce is a recent addition to my friends' list, who responded to an "Under The Dome" reference I made in the comments for a common friend's status update:

I am an actual resident of Chester's Mill, Maine, and already "Under the Dome", Toby. We film it here in Wilmington, NC. You might see me in the pilot tomorrow night. I am in a grey sweatshirt following our Sheriff (played by Jeff Fahey of 'Lost') and his Deputy Linda into the Sweet Briar Rose Diner. 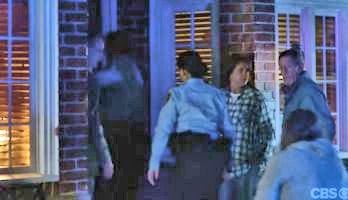 Since as of just that first episode Jennifer's character had no name, I see no reason why she couldn't have been playing herself.  Therefore, she's now a citizen of Chester's Mill, Maine, instead of living in North Carolina as she does in the real world (and where the series is being filmed.)

Jennifer is a member of that unsung assembly of actors known as background artists - or "atmosphere people" as I like to call them.  They serve as the building blocks for the foundation of the Toobworld Dynamic, for oftentimes their characters remain unnamed - and therefore could be the same characters seen in other productions in which they have acted.

Jennifer has worked in over fifteen film and TV projects in North Carolina, so it's pozz'ble, just pozz'ble, that she has other TV appearances that could be considered part of her resume in the League of Themselves.  All of them could be the same character - her own televersion.

In this second screen capture - you can see Jennifer's head just popping into view in the doorway of the diner: 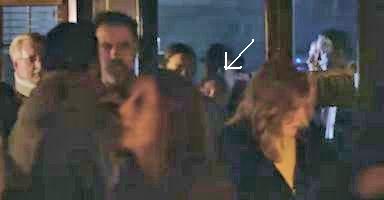 (I apologize for the quality of this frame grab, but I do have limited resources - and talent! - here at Toobworld Central.)

I contacted Jennifer about the scene and learned that her "televersion" is also a "recastaway" - that is, she is played by two different people.  The woman we see from behind following the law officers into the diner wasn't available to film the interior shots, so Jennifer was chosen to continue the role.

Because we never saw the other lady's face, it's basically a "recastaway" that didn't really need to be mentioned.  Nor does it need to be "splained away" as to why she gained a whole new face.  So Jennifer is spared the usual splainins like magic, plastic surgery, alien impersonation, or look-alike.

And there's the major difference between Jennifer's real life in the Trueniverse and her life in Earth Prime-Time.  Over there she lives in Maine and is currently trapped "Under The Dome" in Chester's Mill...... 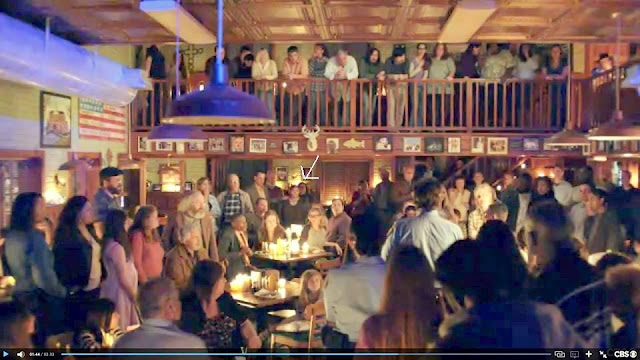 I'm sure there will be plenty of other opportunities for Jennifer to appear in TV productions there in North Carolina.  And it could work out that they could be continuations of her televersion's life story.

That is, of course, unless something apocalyptic should happen to Chester's Mill while it's still 'Under The Dome'......

Thanks for playing our game, Jennifer!

By the way, since this actually "happened" in Toobworld, and isn't Wish-Craft on our part, I'm making Jennifer Tricia Bagoly Bunce our League of Themselves showcase for the day!

Labels: As Seen On TV, By Any Other Name, Game of the Name, IDD/FB, League of Themselves, Life During Prime-Time, Linkin' Haze, Location Shot, O'Bservations, Recastaways, Tele-Folks Directory