LEAGUE OF THEMSELVES - NEIL PATRICK HARRIS

We're celebrating Pride today in the League of Themselves.... 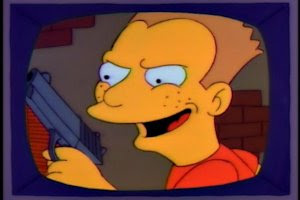 From Wikipedia:
Neil Patrick Harris (born June 15, 1973) is an American actor, singer, director, producer and magician. He is best known for the title role in 'Doogie Howser, M.D.', the womanizing Barney Stinson in 'How I Met Your Mother', a fictionalized version of himself in the "Harold & Kumar" series, and the title role in Joss Whedon's musical web series "Dr. Horrible's Sing-Along Blog".


Harris is openly gay, confirming this in November 2006 by saying "I am happy to dispel any rumors or misconceptions and am quite proud to say that I am a very content gay man living my life to the fullest and feel most fortunate to be working with wonderful people in the business I love."

Harris attended the Emmy awards in September 2007 with his partner David Burtka, later confirming the relationship, which he said began in 2004, in an interview on 'The Ellen DeGeneres Show'. On August 14, 2010, Harris announced that he and Burtka were expecting twins via a surrogate mother. The fraternal twins Gideon Scott, a boy, and Harper Grace, a girl, were born in 2010.

Following the passage of the Marriage Equality Act in New York on June 24, 2011, Harris and Burtka announced their engagement via Twitter, stating that they had proposed to each other five years earlier but kept the engagement secret until same-sex marriage became legal. 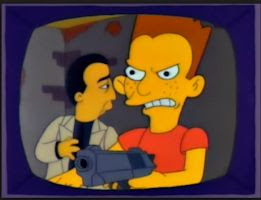 AS SEEN IN:
'The Simpsons'
"Bart The Murderer"

SYNOPSIS:
Bart Simpson is accused of murdering Principal Skinner when he begins working for the mobster Fat Tony.  While he was still considered guilty, a TV movie was made about the case with Neil Patrick Harris playing the role of Bart.

From a promo about the movie:

`Bart': Shut up! Where do you want it, Skinner? 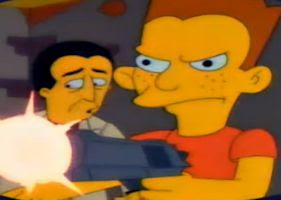 O'BSERVATIONS:
That appearance was made back in the early 1990s, long before NPH came out as gay.  Perhaps he should return to 'The Simpsons' now as the proud gay family man he is....

Okay, so this showcase isn't the best for celebrating Pride today, but it is colorful!