Well, Chester here, was in charge of keeping order in our streets on that Fourth of July, you know, making sure that there wasn't any fights or men getting drunk in public. That sort of thing. I had made Chester dress up in our national colors: red, white and blue and wear a top hat and white beard to look like a man from the Revolutionary War.
from 'Gunsmoke' Fanfic
by Kenneth Avery

In August, Toobworld Central will once again follow tradition and concentrate on TV Westerns.  So as a teaser for the month-long special, I thought I might as well combine the genre with today's celebrations in a Super Six List......

SIX WESTERN EPISODES THAT TAKE PLACE
ON THE FOURTH OF JULY

1)  LAREDO
Episode: Pride of the Rangers (1965)
The Rangers and the Army have a continuing battle over who is the best. The Army is putting up its boxing champ against the best the Rangers can produce on the Fourth ofJuly. Ranger Moran is goaded into taking the challenge.

2) THE VIRGINIAN
Episode: Big Day, Great Day (1962)
Steve and Judge Garth along with Trampas sneaking along head to Casper to pick up Betsy's long overdue Christmas present, an Italian canopy bed, on the Fourth of July.  The Judge runs into a professional wrestler, Frank Krause, an old friend who is there for a world championship match and to get married.

4)  HIGH CHAPPARRAL
Episode: Champion of the Western World (1968)
Blue is saved from being killed by a highwayman by Paddy O'Bannion, a prize fighter in the Tucson Fourth of July celebration.

3)  THE TALL MAN
Episode: The Liberty Belle (1961)
Elena, Pat's former girlfriend, returns to Lincoln looking for protection. The man she left Pat for, Joe Durango, is an outlaw and a deadly gunfighter. The gunfighter plans to exact his revenge on both Pat and Elena using the town's Fourth ofJuly celebration to cover his gunplay.

5)  FATHER MURPHY
Episode: The Rockets' Red Glare (1983)
Garrett ruins Gold Hill's benefit Fourth of July show by stealing all the fireworks from Murphy'''''''s barn. He puts them in his saloon safe. A comical old safe cracker, an escaped convict, befriends Murphy and the kids and liberates the firecrackers.

6]  KING OF THE HILL
Episode: Born Again on the Fourth of July (2009)
As the Fourth of July nears, Bobby becomes an overzealous born again Christian after attending Lucky's evangelical church, and destroys Hank's giant Uncle Sam decoration, believing it to be a graven image.
[Gotta have a Tooniverse entry!]

All the descriptions come from the IMDb.......

Have a fun and safe Independence Day! 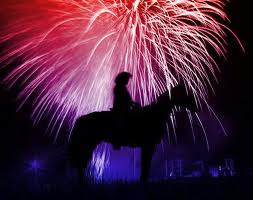