For the month of June, we featured two inductions into the TV Crossover Hall of Fame so far - the first was the Birthday Honors List induction of two characters played by my friend Shirley Jordan. The second one was another Birthday Honors List, but for my brother AJ's birthday - that of Warren Zevon.

But we never did get around to the actual induction for the month of June.

In the past, the June membership had been of the off-beat, mostly of puppets and cartoon characters. In the last few years, however, it has been more in keeping with the spirit of the month, under the sway of the Zodiac sign Gemini - that of the Twins.

And so on this last day of the month, Toobworld Central would like to use this opportunity to induct two men who appeared in a trio of TV movies that provided a good look at the Law, as practiced in the late 40's and early 1950's. 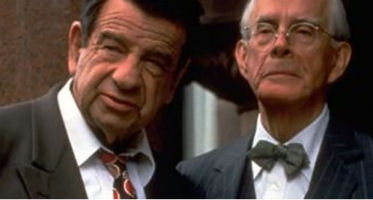 TV movies are considered independent of each other, unlike episodes of a TV series. There's never a guarantee that a sequel would be made, so to get three in a series is something to be honored. And the fact that it takes a minimum of three qualifying examples to support a candidate's entry into the Hall, then Cobb and Judge Bell are considered eligible in my law book.

These are the TV movies in which they appeared: 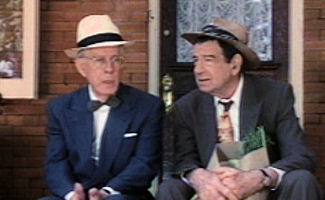 (I have refrained from calling these two "The Incidentals".)

It is a case of diminishing returns, but each of these movies still are far superior to some of the schlock that passes for TV movies today. And that first one, "Incident In A Small Town", I will hold up as an equal to the very best episode of 'Foyle's War' in depicting the small events that made up the great panoply of World War II but which have been forgotten as being trivial.

And this induction serves as a nice tip of the Toob Top to two fine actors from whom we'll never get any more characters into the Tele-Folks registry - Walter Matthau and Harry Morgan.

So here's to you, gentlemen. Welcome to the Hall!