AS SEEN ON TV: RADULFUS & HELLEBORE


For this "Two For Tuesday" edition, we have two characters played by Terence Hardiman..... 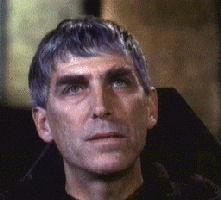 "CREATED BY":
Ellis Peters
(The character is based on an historical character.)

AS SEEN IN:
'Cadfael'

From Wikipedia:
Abbot Radulfus (1138–1148) [is a] real historical figure. [He is highlighted] as the median, the ideal abbot, with whom Cadfael has a deep empathy and understanding.

From Brother Cadfael Characters:
Abbott Radulfus was a lucky choice for the monastery, considering how many positions were filled with the merely ambitious. He has been out in the world enough to recognize Cadfael's worth, and to give him the room Cadfael needs to protect the monastery from scandal or dishonor.

Abbot Radulfus:
"For even the pursuit of perfection may be sin, if it infringes the rights and needs of another soul. Better to fail a little, by turning aside to lift up another, than to pass by him in haste to reach our own reward, and leave him to solitude and despair. Better to labour in lameness, in fallibility, but holding up others who falter, than to stride forward alone."

Apparently I have written about Radulfus in the past...... 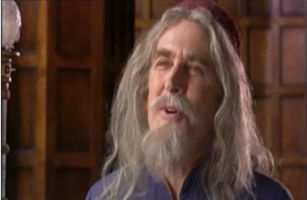 AS SEEN IN:
'The Worst Witch'

From the "Worst Witch Wiki":
Mr Egbert Hellibore is the Grand Wizard (Chief Magician in the books), and Headmaster of Camelot College. He appears at the Halloween celebrations in the first book. He later appears again in the third book at the Halloween celebrations where he bans Mildred Hubble and Ethel Hallow from attending the celebrations for causing the havoc the previous year. In the TV series, Egbert Hellibore was portrayed by Richard Durden and Terrence Hardiman. He is often referred to as "Helliboring" in the TV series. He is a big fan of crumpets, scones and cream tea.

From Karl S. Green:
[Terence Hardiman] did a great job in getting across the sheer pomposity of the character, along with the great power and authority that he posesses, and stole most of the scenes that he was in.

Miss Cackle:
"You haven't said what your talk will be about."
Grand Wizard Hellebore:
"A subject of infinite excitement and interest! A history of the Grand Wizard, his power and his glory! In short, Miss Cackle, myself."

What if Hellibore was related to Radulfus?  What a scandal that would be for the Church in Toobworld!

PS:
Both names have alternate spellings: "Radulphus" and "Hellibore".....