AS SEEN ON TV: JOHN SELF 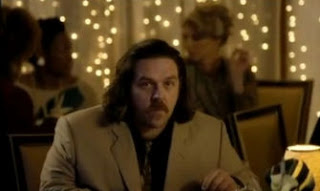 From Wikipedia:
"Money: A Suicide Note" is a 1984 novel by Martin Amis. Time magazine included the novel in its "100 best English-language novels from 1923 to the present".

"Money" tells the story of, and is narrated by, John Self, a successful director of commercials who is invited to New York by Fielding Goodney, a film producer, to shoot his first film. Self is an archetypal hedonist and slob; he is usually drunk, an avid consumer of pornography and prostitutes, eats too much and, above all, spends too much, encouraged by Goodney.

The actors in the film, which Self originally titles "Good Money" but which he eventually wants to rename "Bad Money", all have some kind of emotional issue which clashes with fellow cast members and with the parts they've signed on for - the principal casting having already been done by Goodney. For example: the strict Christian, Spunk Davis (whose name is intentionally unfortunate), is asked to play a drugs pusher; the ageing hardman Lorne Guyland has to be beaten up; the motherly Caduta Massi, who is insecure about her body, is asked to appear in a sex scene with Lorne, whom she detests, and so on.

Self is stalked by "Frank the Phone" while in New York, a menacing misfit who threatens him over a series of telephone conversations, apparently because Self personifies the success Frank was unable to attain. Self is not frightened of Frank, even when he is beaten by him while on an alcoholic bender. (Self, characteristically, is unable to remember how he was attacked.) Towards the end of the book Self arranges to meet Frank for a showdown, which is the beginning of the novel's shocking denouement; "Money" is similar to Amis' five-years-later "London Fields", in having a major plot twist.