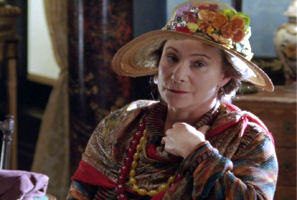 From Wikipedia:
Ariadne Oliver is a fictional character in the novels of Agatha Christie. She is a mystery novelist and a friend of Hercule Poirot.

Mrs Oliver often assists Poirot in his cases through her knowledge of the criminal mind. She often claims to be endowed with particular "feminine intuition," but it usually leads her astray. She is particularly fond of apples, which becomes a plot point in the novel "Hallowe'en Party".

In the books, Oliver's most famous works are those featuring her vegetarian Finn detective Sven Hjerson. Since she knows nothing of Finland, Oliver frequently laments Hjerson's existence. In many of her appearances, Oliver — and her feelings toward Hjerson — reflect Agatha Christie's own frustrations as an author, particularly with the Belgian Hercule Poirot (an example of self-insertion). The self-caricature has also been used to discuss Christie's own follies in her earlier novels. For instance, in "Mrs McGinty's Dead", Mrs Oliver talks of having made the blowpipe a foot long in one of her novels, whereas the actual length is something like four-and-a-half feet — the same mistake Christie made in "Death in the Clouds". 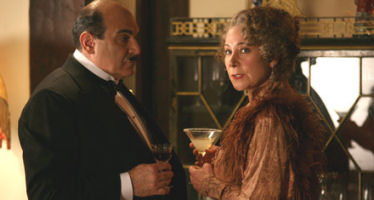 This next sentence will be of interest to my fellow crossover fans:
In "The Pale Horse", Mrs Oliver becomes acquainted with the Rev and Mrs Dane Calthrop, who are friends of Miss Marple ("The Moving Finger"); thus establishing that Miss Marple and Hercule Poirot exist in the same world.

In "Cards on the Table", there is a reference to Mrs Oliver's book The Body in the Library; this title was used by Christie six years later, for a novel featuring Miss Marple. Books by Ariadne Oliver and by a number of other fictitious mystery writers are discussed by characters in "The Clocks" (1963).

Like Christie, she is a member of Detection Club. Christie even thought of placing a murder at the Club with Oliver being one of the suspects/detective but it came to nothing ("Agatha Christie's Secret Notebooks", edited by John Curran). Oliver also makes an appearance in "Elephants Can Remember".

In a short piece in John Bull Magazine in 1956, Christie was quoted as saying, "I never take my stories from real life, but the character of Ariadne Oliver does have a strong dash of myself." The author of the article went on to state, "It is perfectly true that sometimes she works at her stories in a large old-fashioned bath, eating apples and depositing the cores on the wide mahogany surround."

Even in the one novel in which she appears without Poirot ("The Pale Horse"), Mrs Oliver does not function as a detective, in that she rarely participates in the investigation and contributes only tangentially to the solution. In "Cards on the Table", she does interview some of the suspects, and in "Elephants Can Remember", she again interviews witnesses, but none of the essential ones. She is more usually used for comic relief or to provide a deus ex machina through her intuitive or sudden insights, a function that is especially apparent in "Third Girl", in which she furnishes Poirot with virtually every important clue, or in "The Pale Horse", where she inadvertently helps the investigators to determine the type of poison used to kill the murder victims, saving the life of another character.

Further functions of Mrs Oliver are: to enable Christie to discuss overtly the techniques of detective fiction; to contrast the more fanciful apparatuses employed by mystery authors with the apparent realism of her own plots; and to satirise Christie's own experiences and instincts as a writer. Mrs Oliver therefore serves a range of literary purposes for Christie.

The first appearance of Ariadne Oliver on television was in an episode of 'The Agatha Christie Hour' (1982). In an adaptation of the Parker Pyne story "The Case of the Discontented Soldier", she was portrayed by Lally Bowers. 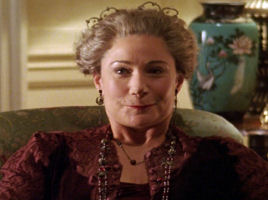 Even though Lally Bowers was the first actress to portray Mrs. Oliver, Zoe Wanamaker played the part opposite David Suchet who is the official version of Poirot for Toobworld. Therefore Ms. Wanamaker's Ariadne Oliver is the official one of Earth Prime-Time.