AS SEEN ON TV: SAMMY GLICK 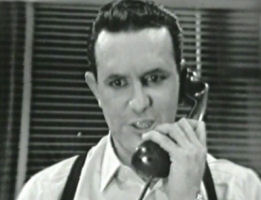 AS SEEN IN:
"What Makes Sammy Run?"

From Wikipedia:
"What Makes Sammy Run?" (1941) is a novel by Budd Schulberg. It is a rags to riches story chronicling the rise and fall of Sammy Glick, a Jewish boy born in New York's Lower East Side who very early in his life makes up his mind to escape the ghetto and climb the ladder of success by deception and betrayal. It was later made into a long-running Broadway musical.

This is the tale of Sammy Glick, a young uneducated boy who rises from copy boy to the top of the screenwriting profession in 1930s Hollywood by backstabbing others.

Manheim recalls how he first met the 16-year-old Sammy Glick when Sammy was working as a copy boy at Manheim's newspaper. Both awed and disturbed by Sammy's aggressive personality, Manheim becomes Sammy's primary observer, mentor and, as Sammy asserts numerous times, his best friend.

Tasked with taking Manheim's column down to the printing room, one day Glick rewrites Manheim's column, impressing the managing editor and gaining a column of his own. Later he steals a piece by an aspiring young writer, Julian Blumberg, sending it under his own name to the famous Hollywood talent agent Myron Selznick. Glick sells the piece, "Girl Steals Boy", for $10,000 and leaves the paper to go to work in Hollywood, leaving behind his girlfriend, Rosalie Goldbaum. When the film of "Girl Steals Boy" opens, Sammy is credited for "original screenplay" and Blumberg is not acknowledged.

Glick rises to the top in Hollywood over the succeeding years, paying Blumberg a small salary under the table to be his ghost writer. He even manages to have "his" stageplay "Live Wire" performed at the Hollywood Playhouse, although the script is actually a case of plagiarism, "The Front Page" in flimsy disguise; strangely enough, no one except Manheim seems to notice. Sammy's bluffing also includes talking about books he has never read.