AS SEEN ON TV: MADELINE 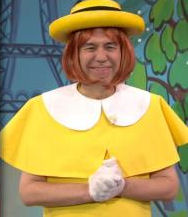 AS SEEN ON:
'The Tonight Show with Jay Leno'

From Wikipedia:
"Madeline" is a children's book series written by Ludwig Bemelmans, an Austrian author. The books have been adapted into numerous formats, spawning telefilms, television series and also into a live action feature film. The adaptations are famous for having the closing line, first uttered by actress Ethel Barrymore in a play: "That's all there is; there isn't any more."

The first book in the series, "Madeline", was published in 1939. It proved to be a success, and Bemelmans wrote many sequels to the original during the 1940s and 1950s. The series continues to this day, written by Bemelmans' grandson John Bemelmans-Marciano.

Madeline is the smallest of the girls and the title character. She is about 7–8 years old, and is the only redhead. She had her appendix removed in the first story. She is known for being the bravest and most outgoing of the girls.

The story takes place in a Catholic boarding school in Paris. Contrary to popular belief, the girls are not orphans. In the first book in the series, Madeline's "papa" sends her a dollhouse when she is ill. Also, the girls all go to visit their parents in the Christmas book.

The books all start with the line "In an old house in Paris that was covered in vines, lived twelve little girls in two straight lines ...". The story is written entirely in rhyme, and the simple themes of daily life appeal to children.

The original series of Madeline books written by Ludwig Bemelmans has six books:

The year is nearly halfway finished, so I thought I might finally use the character (and actor) which first gave me the idea of doing a literary version of the "As Seen On TV" showcase.  Plus it was an easy one to fix up and I had this unfamiliar thing called "a life" which I had to attend......