Last week he posted a nice tribute to the early TV work of the late Susan Tyrell, who passed away on June 16. Tyrell was not one to be afraid to take chances, and is best known for her indie roles that were off the beaten path. (Her best-known movie would probably be "Fat City", directed by John Huston, for which she was nominated for Best Supporting Actress.)

Stephen Bowie posted a picture with his testimonial, showing Ms. Tyrell as a young girl behind Patty Duke in her eponymous TV sitcom. I don't think her character had any lines or a name - it's not even listed among her credits at the IMDb! (No surprise there.....) 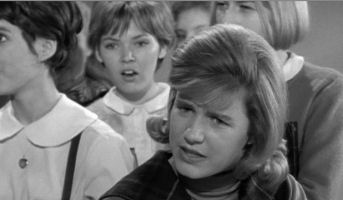 If you're familiar with my mania, you know these atmosphere people fascinate me. I want to know what happened to them before and after their moment in the sun. What kind of life during prime-time did they have?

As for this girl from Brooklyn Heights, New York, I think our best bet is that she grew up to be Mary Torino, a woman seen in the final episode of 'Kojak', "In Full Command" (which also guest-starred Danny Thomas.) No matter how she was portrayed in that episode, there was a lot of livin' she did between that and her earlier appearance when she was attending Brooklyn Heights High School. Anything could have happened to her over those years.

Another possibility was Sconset Sal from 'Wings', which would at least keep her in the sitcom category (even though both type of shows should co-exist.) But based on the episode, I think Sal lived her whole life on Nantucket. 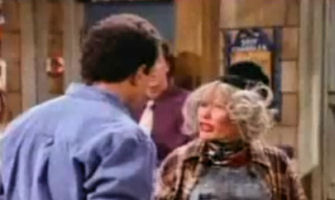 In both cases, I'd like to think that her characters still live in Toobworld, and that both of them have many more TV seasons ahead of them.

As for "Susu" herself, it's like Red Skelton always said, "Good night and may God bless."

My thanks to the Classic TV History Blog for posting that picture!

Labels: As Seen On TV, Blogmates, By Any Other Name, Double Vision, Game of the Name, Hat Squad, La Triviata, Life During Prime-Time, Missing Links, O'Bservations, TV timeline, Twipped from the Headlines